Scott Horner, a farmer in western Colorado, awaits the bloom of spring lilacs with anticipation each year. Once the lilacs peak, it’s time for Horner to plant potatoes and launch the growing season.

The fragrant bunches have been appearing earlier and earlier in recent years, Horner has noticed.

Earlier lilacs, plants growing out of turn, an extended wildfire season: these are some of the observations and data that are shared in a new science journalism project, iSeeChange, launched at KVNF-TV in Paonia, Colorado. The initiative is designed to bring local farmers, ranchers, and residents into conversation with scientists about environmental issues.

iSeeChange producer Julia Kumari Drapkin described her project at RFF’s February 2013 First Wednesday Seminar, “The Media, Science and Cognition: How We Shape Our Understanding of Environmental Issues.” The discussion was part of RFF’s 60th anniversary event series, Resources 2020, a yearlong exploration of how economic inquiry can address future environmental challenges.

Drapkin, along with Barbara Allen, the Ada M. Harrison Distinguished Teaching Professor of the Social Sciences and chair of Women’s and Gender Studies at Carleton College in Northfield, Minnesota, led the discussion about how the public understands and shapes its opinions about global warming and other environmental issues.

Drapkin went to Paonia, which last year experienced its worst drought since 1924, to launch iSeeChange as part of Localore, a nationwide project funded primarily by the Corporation for Public Broadcasting to bring public service journalism to local media. Her vision was to turn science reporting upside down by starting with the observations of local residents on changes in climate and bringing scientists into the conversation to discuss how those observations fit and compare with broader scientific research.

At the same time, the observations and data collected and recorded by local farmers and ranchers—many in family diaries that go back decades—may provide a data set useful to climate researchers.

“This is a community that lives outdoors and is built around the land,” Drapkin said. “They are farmers, ranchers, hikers, campers. These people are not afraid of science. They are living science every day much more than I do here in Washington, DC.”

In addition to producing multimedia news stories, Drapkin created a website that serves as a sort of online almanac where local residents post questions and observations about weather.

An entry from February 19, 2013 reads, “I was wondering why I've had allergic-type sneezing. . . . Juniper pollen, though still low, is already floating in the air, several weeks earlier than ‘usual’—ugh!” 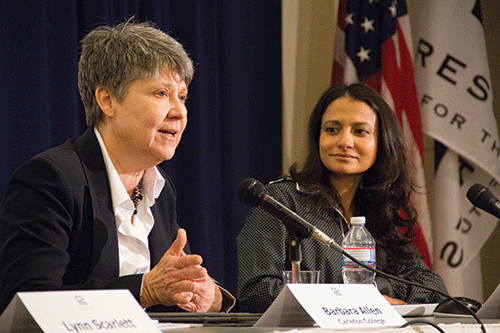 Many of the residents in Paonia were noticing changes in weather patterns, Drapkin said. For example, the fire chief said the wildfire season was lasting much longer than the normal two months. She discussed it with a researcher who confirmed that it had lasted 78 days longer than usual in the last couple of years. Drapkin said most people in Paonia were skeptical that changing weather patterns had anything to do with human activity. After Drapkin described her real-world experience, Allen put the project into the context of how people understand and make decisions about information they receive. She said most people’s attitudes toward climate change are shaped through “hot cognition,” a combination of information, personal experience, and emotion related to that information.

Allen said the only way to change these habitual ways of thinking is to be a trusted source and to create dynamic dialogue, as iSeeChange has done.

Allen drew lessons from the project that other science communicators can learn from. In her news stories about climate and weather, Drapkin interviews local residents about their experiences, placing the stories in the context and language of the community. Drapkin also mediates between the scientific and local communities by introducing scientific terms in the vernacular—what Allen calls the language of experience. The stories include information that doesn’t necessarily conform to a preset conclusion. People can add their own observations and data to the iSeeChange almanac. The crowdsourcing builds a resource around which the community is now discussing climate, Allen said.

To watch video of the event, visit www.rff.org/cognition. Visit thealmanac.org to find out more about the iSeeChange project.