How Costly Are Driving Restrictions Programs? Evidence from Mexico City

If you think traffic congestion and air pollution are bad where you live, a visit to Mexico City may provide some perspective. The average commuter there spends the equivalent of three 40-hour work weeks stuck in traffic each year. And some sections of the city have unhealthy concentrations of every major pollutant.

Perhaps not surprisingly, government officials in Mexico City have resorted to heavy-handed tactics to deal with these problems. Among them is the “Day Without Driving” (Hoy No Circula) program, which since 1989 has banned some vehicles from driving one workday each week (and since 2008 one Saturday each month), depending on the last digit of the license plate.

At first blush, this policy had some attractive features. It seemingly removes a significant fraction of vehicles from the city’s roads six days a week. There appears to be an element of fairness because license plate numbers determine which vehicles are banned each day. And implementation seems relatively straightforward.

But on reflection, there is plenty of room for doubt. Used vehicles, particularly old and highly polluting ones, are relatively inexpensive in Mexico City. What if drivers purchase clunkers to commute on days that their primary cars are banned, increasing the number of vehicles in the city and maybe even overall driving? And what if drivers simply shift driving to unrestricted days, so that net driving does not drop? In fact, several rigorous evaluations of the Day Without Driving program have concluded that it has not cut congestion or pollution over the long run for exactly these reasons.

Why then has the program been kept in place for a quarter century? One reason is that we know virtually nothing about the costs it imposes on households or the distribution of these costs across socioeconomic strata. On the face of it, these costs could be substantial. Depending on where in Mexico City households are located, public transportation can be inaccessible or otherwise unattractive. So the costs of not being able to drive one or two days per week could be quite large. Moreover, one would expect these costs to be highest for poorer households that can least afford second cars, taxis, and delivery services. We conjectured that a rigorous analysis of the costs to drivers of the Day Without Driving program could help generate political will for reforming it.

But how can the costs of driving restrictions programs be measured? Simply adding up costs for representative drivers is likely to be impractical because of the challenges of counting nonmonetary costs (such as lost time), estimating the costs of complex adaptation strategies, and controlling for ancillary benefits of adaptation measures.

For these reasons, we used a novel survey-based approach: the contingent valuation (CV) method, which is primarily used to value environmental and health-related nonmarket goods, such as clean air and water. A CV survey typically describes a program or project that would generate a change in the nonmarket good—for example, a municipal sewage project that would improve water quality—and then asks respondents questions about their willingness to pay for it. Given a representative sample, the CV survey data can be used to calculate total willingness to pay for the program or project, which is a measure of its total value.

We adapted this method to measuring the costs of Mexico City’s Day Without Driving program. To our knowledge, ours is the first application of the CV method to estimate the costs of a real regulatory program. Our survey describes a program that exempts drivers from weekly driving bans. We administered it door-to-door to a random sample of 2,500 drivers in the greater Mexico City metropolitan area, and we used the responses to calculate the total willingness to pay for rescinding the regulation, which is a measure of the total cost the regulation imposes.

Based on responses to our CV survey, we estimated the costs of the Day Without Driving program to be US$77 to $103 per vehicle per year—about 1 percent of the annual median income in our sample. Given that there were 4.7 million vehicles in the Mexico City metropolitan area the year our survey was administered, these estimates imply that the total cost of the program is US$367 million to $490 million per year—roughly 3 percent of the 2013 gross domestic product of Mexico City.

Our analysis indicates that the Day Without Driving program is regressive: we find that the cost of the program is not significantly different for rich and poor drivers and therefore represents a larger fraction of income for poorer drivers.

Although Mexico City probably has the world’s most famous driving restrictions program, several other megacities, including Beijing and São Paulo, have similar initiatives. Altogether, more than 50 million people are now subject to intermittent driving bans. Recent studies of the benefits of these programs have been decidedly mixed. Our results suggest that whatever benefits these programs may or may not have, they can be quite costly and may disproportionately hurt drivers from poorer households. Although additional evidence from other programs is needed to determine whether and how our results generalize, the findings should give pause to policymakers currently using or considering driving restrictions to address vehicular pollution and congestion.

Francisco Alpízar is the director and a senior research fellow at the Environment for Development Initiative Center for Central America. His fields of specialization include environmental policymaking and economic valuation of the environment.

Delhi’s Odd-Even Driving Policy: There Has Got to Be a Better Way 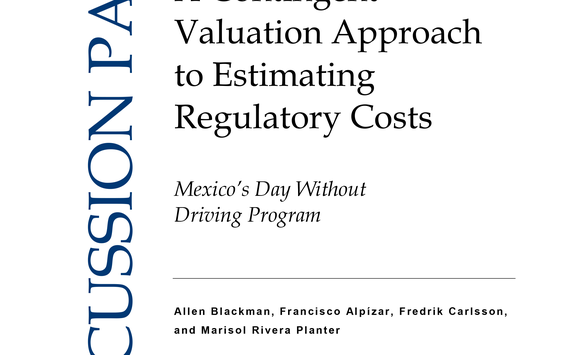