The extraction of shale gas using hydraulic fracturing (fracking) requires the use and storage of large amounts of freshwater, fracking fluids and flowback, and “produced water”—a highly salinized combination of water and chemicals that exists in shale formations and is forced out of the ground as a by-product of gas extraction. Except for the freshwater, these fluids can contain heavy metals, radioactive substances, and other contaminants that are highly damaging if released into the environment. For this reason, the fluids are typically stored in lined, open pits in the ground or in sealed tanks.

A 2013 RFF survey of experts identified the storage of fracking wastewater in pits—and its potential to leak into surrounding rivers and streams—as a priority environmental risk that is not being addressed adequately by industry or government. Some have argued that storage tanks are a better choice than pits because they provide a “closed system” and can greatly reduce the possibilities of spills. New research by RFF’s Yusuke Kuwayama, Alan Krupnick, Skyler Roeshot, and Jan Mares examines whether this assertion is true. They find that tanks are not necessarily a fail-safe alternative.

Kuwayama and colleagues extracted data from the online spill database of the State of New Mexico Oil Conservation Division to catalog the reported volume of fluids used in fracking and other oil and gas production activities that was spilled and not recovered from pits and tanks, from 2000 to 2014. In Figure 1, they show that although most pit and tank spills lost less than 1,000 gallons, both storage methods have resulted in some larger-scale spills (6,000 to 10,000 gallons). Furthermore, the figure omits a handful of even larger spills, including six spills from pits that were larger than 100,000 gallons. Notably, spills from pits occurred twice as often as spills from tanks, while also losing over 10 times as much fluid over the study period—1,569,973 gallons versus 156,534 gallons. But the researchers caution that what is spilled matters, too. 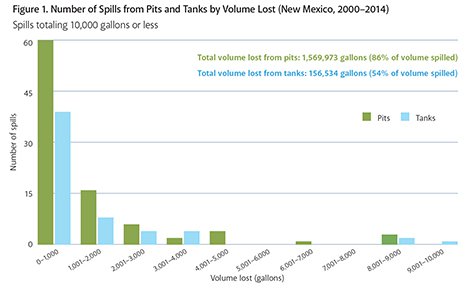 An examination of the data on the types of fluids spilled showed differences between the spills from pits and tanks (Figure 2). Reporting on tank spills included fluids such as acid, gelled brine, and unspecified chemicals. Pit spills showed higher frequencies and volumes of produced water, drilling mud, and brine water, and less frequency (but significantly more volume) of crude oil. The differences in types and volumes of fluids spilled suggest that a one-size-fits-all approach to regulation is unlikely to be cost-effective.

The researchers also looked at the causes of the spills. Tanks seemed to be more vulnerable to lightning strikes, vandalism, and fire, which were not reported as spill causes for pits. Information on the causes of spills could be valuable for policymakers in deciding whether pit and tank storage regulations should be adjusted. It also may help natural gas producers understand what voluntary actions they could take to reduce the occurrence of these spills.

Finally, the researchers note that New Mexico’s system is a good example of the transparency that is needed for stakeholders and the public to better understand the potential environmental impacts of fracking. However, more research is needed to fully understand the health and environmental impacts of related spills and the cost-effectiveness of implementing spill safeguards.

RFF on the Issues: Oil and Gas Wastewater Storage and Leaks 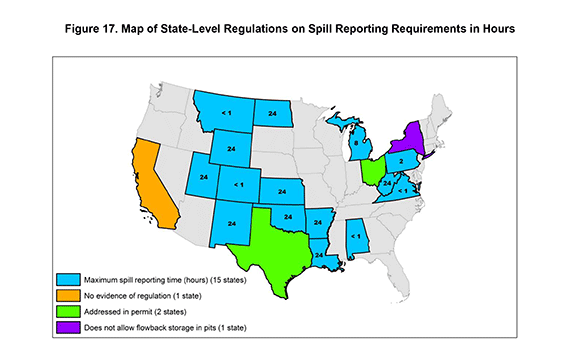