The US Environmental Protection Agency’s (EPA&apos;s) Clean Power Plan is one of the most significant and controversial climate policies of the Obama administration. Some argue that the plan takes an important step in demonstrating US leadership in addressing climate change and meeting the emissions reduction goals laid out in Paris. Others have sued EPA, arguing that the plan is an overreach of the agency’s power and will significantly harm the US economy. In February, the Supreme Court halted implementation of the plan until the legal challenges are resolved.

The Supreme Court’s action was highly unusual. It is uncommon for federal courts to block the implementation of a regulation while they decide the merits of the challenges, and it is even more unusual to grant a stay on a rule with compliance deadlines that are delayed for several years. To our knowledge, the Supreme Court has never before acted to freeze the implementation of a regulation after a federal appeals court has declined to do so (as the DC Circuit Court of Appeals did in January) and before the appeals court has completed its evaluation of the merits of challenges to the rule.

Legally, the burden of proof is on the challengers of a rule to demonstrate that a stay is justified. Requests for the stay cited potential harm to the coal sector, electricity consumers, and the broader economy, as well as to states developing their compliance plans. While the court did not publicly explain its action, one of the central arguments made in requests for a stay was that the plan would impose large, immediate, and irreparable costs to the coal sector. In new research, we find this reasoning to be economically unjustifiable.

The Clean Power Plan will lead to some retirements and shutdowns of individual coal-fired plants and coal mines. But the timing of these costs, which is central to the arguments made when requesting the stay, does not support the Supreme Court’s decision.

The stay is justified based on harm to the coal sector only if costs:

Our analysis suggests that existing market, technology, and policy trends are already putting pressure on the coal sector. Because of these trends and the current compliance timeline, the Clean Power Plan will put minimal additional pressure on the coal sector for at least another decade, and the plan incorporates enough flexibility to allow businesses to delay any closures or other irreversible measures until well after the litigation period.

“The Clean Power Plan will continue to shift electricity generation away from coal, but it is by no means the most important source of pressure on the coal sector.”

The Clean Power Plan will continue to shift electricity generation away from coal, but it is by no means the most important source of pressure on the coal sector. The electricity sector has been changing because of forces that predate the plan and likely overshadow it in importance.

At the same time, the United States has experienced unprecedented growth in wind and solar energy. For example, investments in new wind-powered generators have caused wind’s share of total electricity generation to increase tenfold, from 0.4 to 4.7 percent between 2005 and 2015. Policies supporting renewables and technological improvements largely explain this growth. In fact, most states now require a certain level of electricity generation from renewables.

The Clean Power Plan will continue the path of lower emissions. However, it will do so at a less rapid pace than has been observed in the last decade and at a lower cost to the coal sector than the cost of market and policy trends already underway. Our modeling shows that because of these trends, total compliance costs will be close to zero through the mid-2020s—and will be far outweighed by the public benefits of the policy.

Small Effects on Costs and Profitability

Importantly, the ultimate costs of the plan are not relevant in the decision to issue a stay. Whether coal-fired plants will retire or coal mines will shut down after the litigation is irrelevant. Irreparable harm during the course of judicial review can arise only in situations in which it would not be possible for the industry to take interim measures or postpone irreversible decisions.

Our modeling of the Clean Power Plan shows that although the plan will increase pressure on the coal sector, this pressure will not begin until about a decade from now. Until at least the mid-2020s, the plan will cause minimal decreases in coal consumption. The plan will not affect the profitability of coal-fired plants or coal mine production for some time, making it unlikely that irreversible costs attributable to the plan would occur during the litigation period.

Moreover, even if the rule required steeper emissions reductions at an earlier date than it actually does, plant owners would choose to delay any closures or retirements caused by the plan until the litigation is resolved. The Clean Power Plan does not require specific strategies to reduce emissions; instead, it provides flexibility to pursue the best strategies available. This flexibility and the timing of the rule allow states and the coal industry to delay decisions that cannot be undone, such as retiring a coal-fired plant, until well after the litigation period. The ability to delay these decisions means that claims of immediate and irreparable harm to the coal sector are unfounded. Thus, the Clean Power Plan does not meet the economic conditions for irreparable harm to the coal sector.

EPA provided seven years for preparation by states and regulated businesses between the announcement of the finalized plan and the first required emissions reductions. Even if EPA had chosen a substantially compressed time frame and deeper emissions reductions, the power sector could still seek reversible strategies for reducing emissions, such as shifting coal- and natural gas–fired generation, which would allow it to delay irreversible decisions such as plant retirements.

Some have questioned whether the deadlines affecting state compliance plans and the accompanying emissions reductions will (or should) be pushed back if the courts ultimately uphold the plan. The coal sector would benefit from such delays, in the short term, because costs could be pushed further into the future. However, as described previously, existing market, technological, and policy trends make such delays irrelevant to the coal sector for about a decade.

“If the United States delays action, US leadership will be undermined, and other countries may follow.”

At the same time, delaying the deadlines would be costly to the public. Any additional pollution emissions that result would continue to contribute to global warming and harm local air quality. Perhaps even more important is the possible effect that a delay might have on international efforts to reduce greenhouse gas emissions. As one of the world’s largest emitters of greenhouse gases, the United States has played a pivotal role in recent international momentum. If the United States delays action, US leadership will be undermined, and other countries may follow—magnifying the cost of the US delay and having a very real effect on the global climate.

Dallas Burtraw is the Darius Gaskins Senior Fellow at RFF.

Kristen McCormack is a research assistant at RFF.

Linn, Joshua, Dallas Burtraw, and Kristen McCormack. 2016. An Economic Assessment of the Supreme Court’s Stay of the Clean Power Plan and Implications for the Future. Discussion paper 16-21. Washington, DC: RFF. 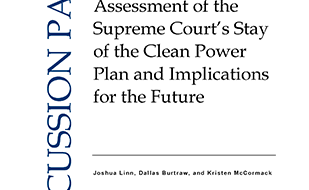 The Supreme Court’s Stay of the Clean Power Plan: Economic Assessment and Implications for the Future

Cracking the Case of the Vanishing Air Pollution Data, with Eric Zou