RFF welcomed Philippe Couillard, Premier of Québec, for a Policy Leadership Forum on February 19. In his remarks, Couillard discussed critical energy and environmental issues facing North America, highlighting state-level initiatives in addressing climate change. A subsequent discussion with RFF President Phil Sharp touched on such topics as regional renewable energy projects, sustainable management in the Arctic Circle, and the “Canadian Energy Narrative.” Below is an edited selection of Couillard’s remarks from the event.

On Emissions Reductions through Cap and Trade
“The cap-and-trade system guarantees the achievement of emissions reduction targets because there’s a word ‘cap’ in cap and trade, which obviously is lacking in other methods of carbon pricing. The system can reduce emissions at the best possible cost to emitters who now have options, a degree of flexibility, and a defined period of time to meet regulatory requirements.”

On Hydropower
“At a time when both fossil fuels and nuclear power raise serious concerns, few industrialized countries can count on such abundant, clean, and renewable sources. The northeastern United States, in our view, must take advantage of this strategic partnership with Québec hydropower to meet its own renewable energy goals and achieve long-lasting reduction of greenhouse
gas emissions.”

On Electric Transportation
“Québec already has enough electricity to power, in theory, one million electric vehicles without affecting domestic supply or exports. So it makes the choice of electric over gas an easier one. We were the first province to implement financial assistance programs for electric vehicle buyers, and Ontario followed suit in recent days. So there are already children in Québec who have never been in a gas-powered vehicle because their parents bought an electric car. To them, naturally, a car needs to be plugged in just like a fridge or a TV set.”

On Creating a Green Economy
“Climate is not a contradiction vis-à-vis economic growth, development, and job creation because it stimulates development of low-carbon technology. The creation of sustainable green jobs and the example of electrification of transport is probably the best to give a practical idea of what we mean when we say this. It promotes the pursuit of economic and environmental goals while preparing for the transition to a low-carbon economy.”

On Future Policy Priorities
“Finally, 10 years after adopting the 2006–2015 Québec Energy Strategy, we have decided to review and issue a new strategy for the 2016–2030 period that will be aligned with the GHG emissions reduction target of 37.5 percent by 2030. It will aim to improve energy efficiency, reduce the quantity of all products consumed, increase bioenergy more generally and clean energy production. Energy efficiency, energy substitution, and behavioral changes are the three pillars of the energy transition required to reach these targets.”

On COP21
“It was important for Québec to be in Paris for this moment. Québec helped gain formal recognition of the role and involvement of Federated States in the fight against climate change. It also successfully worked with the Canadian federal government to ensure that the Paris agreement sends a positive message concerning the use of market mechanisms.”

On Climate, Society, and Economics
“Far from being an obstacle to growth, the fight against climate change will shape the economy of the twenty-first century, just like coal did in the nineteenth century and oil in the twentieth century. Innovative businesses and societies have always adapted, found solutions, and developed products and services. Today those businesses and societies whose vision is adapted to the environmental challenges will be the big winners. And we plan to be one of them.”

On Creating a Net Positive Environmental Impact
“Norway is a very important oil producer but nobody blames them for environmental impact. Why is that? It’s because they have such proactive policies—the electrification of transport is one example—and people see that, globally, the net result for this country’s impact on Earth is positive. There’s no reason why in Canada we shouldn’t have the same approach.”

On Carbon Pricing and Public Opinion
“One thing that I know in spite of all the rhetoric is that … the majority of the public want their government to [take action on climate] and show them the results. And they are even ready to pay through carbon pricing because they know the long-term benefits, in terms of job creation and improvement of quality of life.”

View the video from the event and read the full transcript at www.rff.org/CouillardPLF. 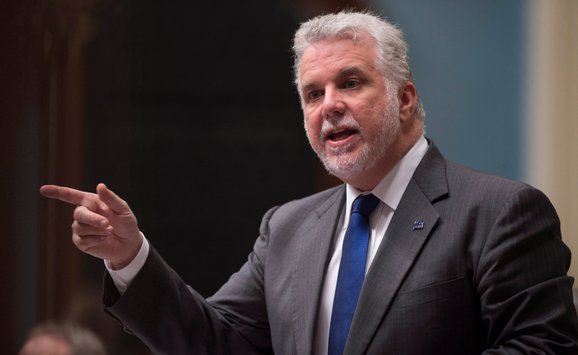 Philippe Couillard: Leadership on Climate Change and How Québec and States Are Leading on Global Challenges