Lighting Up the Last Mile: The Benefits and Costs of Rural Electrification

Approximately one in seven people in the world are still without access to electricity, according to the World Bank. In many countries, the regions that remain to be electrified are remote, and providing electric connections to the mostly poor people living in these areas is cost-prohibitive.

At the same time, decisions about whether and how to expand electricity access—which can trigger significant changes in the economy—are being made in the absence of rigorous empirical evidence of the potential economic benefits. If policymakers are to make informed decisions on which communities should be targeted for grid connections—and what financing and other incentives need to be provided to facilitate access—we need to accurately estimate both benefits and costs in the same setting. Until now, no such studies have compared the realized benefits of connecting households to the grid with the costs of providing them with electricity.

To fill this gap, we examined the effect of rural electrification in the Philippines from 2003 to 2014 on household income and spending and compared that with data on actual electrification costs provided by the Philippine government. The resulting short-term benefits are so substantial that the relatively high costs of infrastructure were recovered in just one year, on average.

Electrification in the Philippines

The Philippines is a middle-income country with roughly 100 million people spread over more than 7,000 islands. Figure 1 shows the evolution of electrification over time. Until 1986, the focus was on the electrification of municipalities, often in urbanized areas. As a result, only 60 percent of households had access to electricity in 1985. 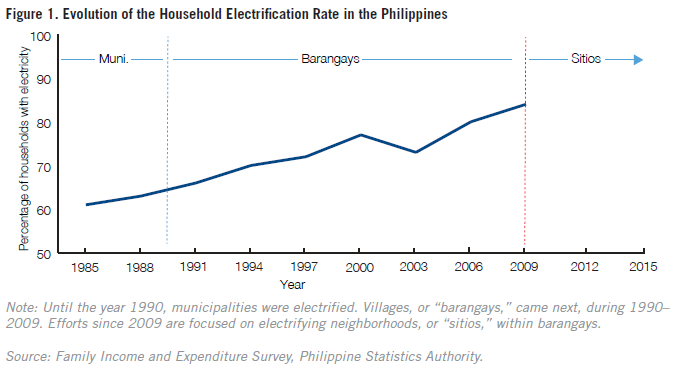 The rate of electrification rose steadily during the next two decades with each successive leadership regime. The household connection rate increased to 73 percent by 2003—with the focus shifting toward electrifying villages, or “barangays,” under the Barangay Electrification Program.

During 2004–2009, electricity was rolled out to the final 10 percent of rural villages (or as we call it, the “last mile”). While all villages were connected by 2009, around 15 percent of households were still not connected. That is, electrifying a barangay does not imply that all households in it have immediate access to electricity. Programs such as the Sitio Electrification Program and the Barangay Line Enhancement Program have helped extend grid infrastructure to neighborhoods and villages that previously relied on off-grid sources, such as solar panels. Currently, rural electric cooperatives, similar to US programs in the 1930s, are responsible for implementing electrification programs in their jurisdictions.

Electricity in the Philippines is expensive. In 2014, the average price across all electricity providers in the country was about US$0.20 per kilowatt hour—nearly double the retail price in the United States and higher than in many other developed countries. In addition to prices, supply reliability is problematic, largely due to the frequency of severe typhoons. Our estimated impacts of electricity are conditional on both of these factors.

We found that the arrival of electricity in a village causes total household expenditures to increase by 38 percent. Similarly, total household income increases by nearly 42 percent. These large effects arise even though, on average, only 23 percent of the households in the village are electrified at first—that is, not all households connect to the grid immediately upon electrification.

By using cost data from the ongoing Barangay Line Enhancement Program, we find that it costs roughly $325 per household to bring electricity to the median village in our sample. Mainly, these costs include the physical costs of electricity poles, wires, and installation labor. Household expenditures in fuel and electricity increase. However, any decreases in expenditures on traditional lighting sources, such as kerosene, are more than set off by increased spending on electricity, which is not surprising given the high cost of electricity in the Philippines. The total cost of electrification per household is approximately $615.

Combining the costs and benefits figures, our data suggest that the physical infrastructure costs of extending the electricity grid to a village are, on average, recovered after just a single year of realized welfare gains.

The Role of Agricultural Income

What explains these welfare gains? One popular theory is that the arrival of electricity allows the household to reallocate labor away from household tasks and toward formal wage labor. Yet we find that the effect of predicted electrification on labor force participation is small and statistically insignificant.

“Our data suggest that the physical infrastructure costs of extending the electricity grid to a village are, on average, recovered after just a single year of realized welfare gains.”

We are not able to pinpoint exactly how agricultural activities benefit from electricity—for instance, whether electricity facilitates irrigation or makes it possible for farmers to mechanize post-harvest operations, such as crop threshing. But our results do show that electricity is being used as an input to agricultural production and suggest that early adopters within the village may be energy-constrained. In such cases, benefits from extending the grid may dominate off-grid options, which offer low voltage and are therefore limited in their usage, especially in driving farm machinery or irrigation equipment. By the same token, late adopters in the village may be those with lower endowments of complementary productive inputs (for example, land and credit) and are prone to using electricity for consumptive purposes. However, further research is necessary to rigorously establish the different settings, as well as causal mechanisms that generate such large welfare estimates.

These findings have significant policy implications for governments weighing the benefits and costs of alternative investment options for developing infrastructure. At the same time, decisions on how to provide electricity to these mostly poor communities living in remote locations have global implications. On the one hand, provision of high-voltage on-grid access will likely mean reliance on fossil fuel–based power generation with large environmental externalities in the form of greenhouse gas emissions. On the other, off-grid, low-voltage sources (such as home solar systems) may provide fewer benefits to households.

Ujjayant Chakravorty is a professor at Tufts University and a fellow at the Toulouse School of Economics and CESifo. He was a 2015–2016 Gilbert F. White Fellow at RFF.

Kyle Emerick is an assistant professor at Tufts University.

Majah-Leah Ravago is an assistant professor at the University of the Philippines.

Lighting Up the Last Mile: The Benefits and Costs of Extending Electricity to the Rural Poor