Recent changes to the US Corporate Average Fuel Economy (CAFE) Standards are a dramatic departure from previous policy. The changes, established in 2011 jointly by the National Highway Traffic Safety Administration (NHTSA) and the Environmental Protection Agency (EPA), require automakers to reduce not only fuel consumption but also greenhouse gas (GHG) emissions from their vehicles—slashing them roughly in half by model year 2025.

Several provisions have been added to give automobile companies more flexibility to meet the standards, which become progressively more stringent over time. New opportunities for trading emissions and fuel consumption credits offer the promise of achieving compliance at lower costs.

Under the new standards, auto manufacturers can trade such credits between cars and trucks in their own fleets. They can overcomply with their car fleet requirements, for example, and undercomply with those for the truck fleet. Overall emissions or fuel use would be the same. They also have the ability to trade credits with other manufacturers for the first time, allowing for the creation of a market for buying and selling emissions and fuel consumption credits. Additionally, EPA’s new rules allowed manufacturers to overcomply with target levels of emissions before the rules were implemented and bank those credits for use when the new rules went in to effect in 2012. NHTSA has always allowed some banking of credits to meet the fuel economy standards.

The potential for savings could be significant because the regulations present uncertain and different costs to the various manufacturers and potentially large penalties for those that do not comply with EPA’s rules. But certain features of the rules pose a challenge to the development of a well-functioning market.

Both NHTSA and EPA allow manufacturers to earn credits, but they are defined differently by the two agencies. EPA’s GHG standards are in terms of average grams of carbon dioxide (CO2) emissions per mile. Under the current footprint standard, each vehicle sold has a different target and each manufacturer will have a standard for its fleet, depending on its mix of vehicle sizes. A manufacturer earns credits when it produces a sales-weighted average fleet with fewer grams of CO2 emissions per mile than its standard. Deficits occur when the manufacturer’s fleet emissions exceed its standard.

NHTSA’s rules are framed in terms of fuel economy or miles per gallon (mpg), which is inversely related to a vehicle’s fuel consumption. A manufacturer earns credits in the same way as described for CO2 emissions above. And CO2 emissions and gasoline fuel consumption are directly related: 1 gallon of gasoline is equal to 8,887 grams of CO2. The rules are supposed to be harmonized so that manufacturers will not have to meet two separate standards.

Understanding the Differences between NHTSA and EPA Credit Programs

Despite the intention to harmonize the rules, differences exist in how credits can be earned and used for compliance. Yet manufacturers must satisfy both rules. Table 1 outlines some of the differences.

Although the rules have many similar provisions, there are some important distinctions in stringency. EPA’s rules are less stringent in that they allow for a longer banking period, and NHTSA restricts a manufacturer’s ability to trade between cars and trucks. EPA’s rules are stricter, however, in that they impose a Clean Air Act violation rather than a fine for non-compliance. Because the two rules effectively regulate the same thing—gasoline consumption and the associated GHG emissions—the stricter regulations will tend to dominate in the credit markets. Differences between the two rules also may tend to drive up the credit price—and therefore the cost of compliance. 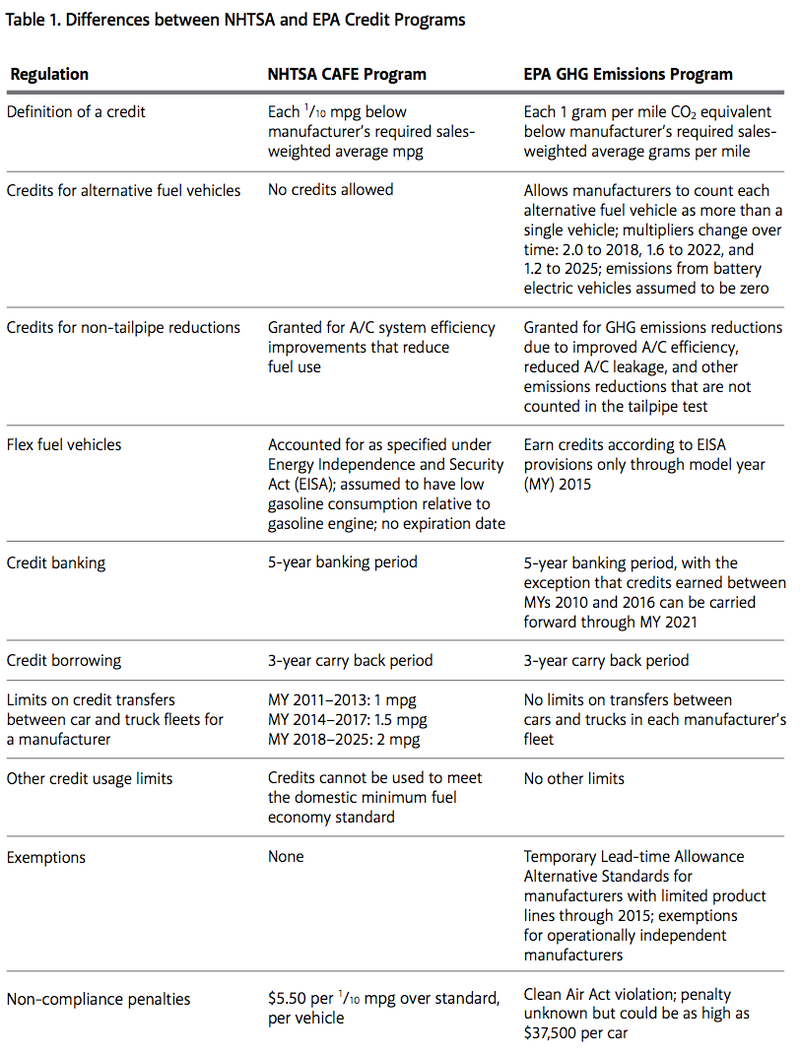 A well-functioning market for trading credits among companies requires an established way for potential traders to find each other and transparency about the prices of trades that have occurred. The history of existing credit trading regimes, such as those established by the California Low Emission Vehicle and Zero Emission Vehicle programs, has been that buyers and sellers of credits find each other on an as-needed basis, and the agencies often report information on quantities traded but not on prices. The CAFE credit trading program is getting started in a similar way.

A well-functioning market requires the opposite—information about the prices of trades but not on how many credits other participants traded. Currently, there is virtually no information for participants about prices and a low probability of a single trading price across trades. Finding trading partners also presents high transaction costs. These characteristics tend to make markets thin and inefficient. Private brokers may have a potential role to play in helping interested buyers and sellers find each other and establishing a more formal auction setting.

In future years, the market is likely to become more active as the standards become stricter and the automakers gain more information and experience in buying and selling credits. The agencies also will need to continue to try to make the rules more harmonized and flexible and to facilitate a robust trading market.

The market for credit trading among automakers is in its early stages, and whether an efficient market will develop is still not clear. Most automakers have been able to overcomply with the standards and accumulate credits, both before the new rules were implemented and since 2012, when they kicked in. The size of this credit pool is large, as companies have used the banking provisions of both regulations. This behavior is to be expected, however, because the standards are becoming much stricter in coming years.

The agencies may want to establish pricing bounds for this market. In particular, there is concern about the costs of meeting the standards for all companies, especially from 2021 to 2025 and beyond if the standards are extended. Currently, the NHTSA fee of $5.50 per one-tenth of a mile per gallon over a manufacturer’s standard represents a price ceiling for NHTSA credits. EPA also might consider establishing a price ceiling. Under the Clean Air Act, EPA cannot require firms to pay a fine in lieu of compliance, but they may be able to sell credits at a specified price that, in effect, represents a maximum cost. Both the agencies also could consider buying permits at some predetermined price floor if the marginal cost of compliance is low. Such interventions would provide information about the range of possible prices to the market participants.

Perhaps the greatest issue with the two credit programs—NHTSA’s for fuel economy and EPA’s for GHG emissions—is that they are regulating virtually the same thing: fuel use and the associated emissions. Under these conditions, two separate markets for credit trading are unlikely to work well. And having to comply with two different rules will make investment decisions for companies more difficult, which is likely to drive up costs. A single market—and a single credit price—would be simpler and more cost-effective at reducing carbon-based fuel use and the related CO2 emissions.