The Endangered Species Act at 40: New Tools for Conservation

Like so many environmental statutes, the Endangered Species Act (ESA) was launched 40 years ago affirming lofty values. The ESA begins, “The Congress finds and declares that . . . species of fish, wildlife, and plants are of esthetic, ecological, educational, historical, recreational, and scientific value to the Nation and its people.” Through the act, Congress strived to “provide a means whereby the ecosystems upon which endangered species and threatened species depend may be conserved, to provide a program for the conservation of such endangered species and threatened species.”

The first four decades of implementing the ESA yielded successes and conflict, but much of the discourse has circled around the conflict: Does the ESA overly burden private landowners? Does it protect species at the expense of human well-being? Is it cumbersome, costly to implement, and inefficient? Does it spawn recurring litigation over timelines and process, while contributing little to actual species recovery? Volumes of critiques of the ESA and its implementation have explored these questions.

"The ESA traditionally has taken a species-by-species approach that constrains the ability to focus on the health of ecosystems."

The verdicts of these inquiries vary, sometimes dramatically. However, the ESA has clearly played a significant role in bringing attention to species at risk of extinction. Although many species remain imperiled, less than 1 percent of the 2,000 listed species have actually gone extinct. And the ESA has compelled significant planning and changes in land management practices to reduce adverse impacts to species that are threatened or in danger of extinction.

Despite some conservation achievements, the implementation of the ESA—and thus future species conservation—faces at least four major challenges:

Several options have emerged to address these four challenges. The ESA is sufficiently broad and general to accommodate most—if not all—of these improvements.

Privately owned lands play an important role in species protection: more than two-thirds of endangered or threatened species make private lands their home, and one-third may be found exclusively on private lands. Yet the ESA initially created disincentives to landowners for species protection because having a listed species on one’s land invoked regulations that could require potentially costly restrictions on land use. Over the past 20 years, many innovations have softened these disincentives, and the US Fish and Wildlife Service (FWS), charged with implementing the act, continues to add to and hone these innovations.

Some of these tools, such as conservation banks and recovery credits, create economic incentives for landowners to engage in stewardship of threatened and endangered species. Conservation banks, set up through agreements with the FWS, offset adverse impacts to species on other lands or from other projects. Each bank is allocated a specified number of credits that can be sold to entities needing to compensate for unavoidable impacts to species, thereby creating revenue for the bank owner. By July 2012, more than 100 conservation banks had been approved by the FWS in 11 states, covering some 60 threatened and endangered species on 790,000 acres.

Similarly, federal agencies can support actions on non-federal lands that benefit target species and in return receive “recovery credits” to offset negative impacts of federal actions. These credits provide flexibility to federal agencies as they seek to fulfill their missions and revenue to the private landowners selling the credits.

The FWS also uses habitat conservation plans (HCPs) to engage private landowners in species conservation. These plans set forth management approaches to minimize adverse impacts to species and enhance conservation of their habitat in order to support recovery. By 2012, the FWS had approved 710 plans (and approved nearly 800 related permits). The plans cover more than 40 million acres and hundreds of species. But limiting their efficacy, many of these plans focus on a single species and cover land parcels of less than 100 acres; only 5 percent cover 100,000 acres or larger, primarily in the Pacific Southwest (see Figure 1). 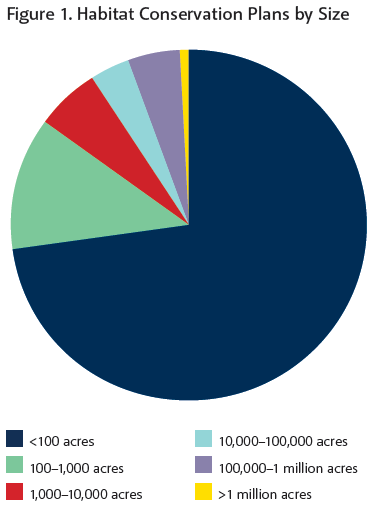 Several recent developments in the design and implementation of HCPs have significantly improved wildlife conservation and landowner engagement. Some HCPs embrace large landscapes, including both public and private lands. Others cover multiple species, including unlisted species, and address cross-cutting threats.

These incentive-based tools present some administrative challenges, including burdensome and time-consuming procedures. Nonetheless, they provide an essential platform to engage private landowners in species conservation, though measures to make them more user friendly could expand their use.

Nature is characterized by interconnections, synergies, and interdependence. Species often function across landscapes and ecosystems regardless of legal and administrative boundaries. Conservation problems unfold at large scales, and solving them requires combined public and private actions across human-made boundaries. These challenges put a premium on developing tools for cross-jurisdictional, public–private, and private–private coordination and cooperation.

The US Department of Agriculture’s Natural Resources Conservation Service (NRCS) currently supports several landscape-scale initiatives through its implementation of multiple conservation programs under the farm bill (see Figure 2). Many of these fall under the umbrella of NRCS’s Conservation beyond Boundaries project. These initiatives build upon existing local partnerships, receive dedicated funding to enhance implementation, use science to inform management practices, and assess performance and outcomes. They are moving beyond what former NRCS chief Bruce Knight called “random acts of conservation” by targeting resources from a variety of NRCS programs to high-priority needs of a given geographic area. The goals of these initiatives are to leverage action and enhance consistent practices through partnerships, focus funding to achieve specific and transparent results, and expand capacity to accelerate action. 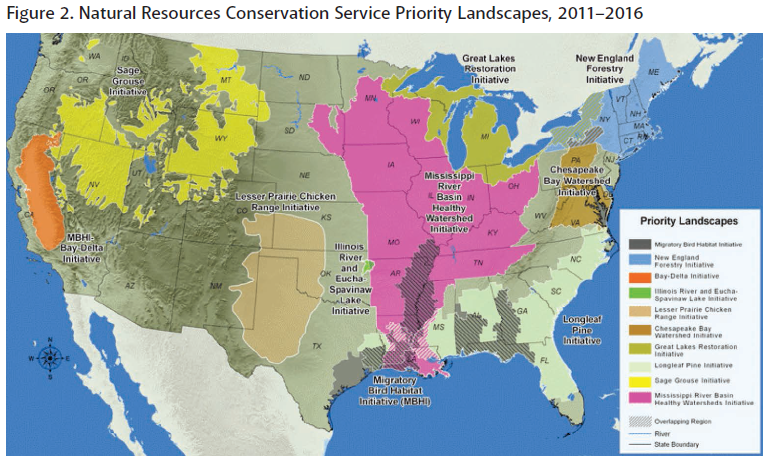 Consider the NRCS’s Sage-Grouse Initiative. Covering activities in 11 states, it seeks to coordinate actions with federal agencies, states, and landowners to reduce threats to the sage grouse, a species of ground- dwelling birds native to the western sagebrush ecosystem. The sage grouse population has experienced a precipitous decline as rangelands are converted to subdivisions, invasive pines encroach on grasslands, and unsustainable grazing practices reduce ground cover. Actions have included moving or “marking” 180 miles of fence near breeding grounds, improving grazing systems on 640,000 acres, and removing 40,000 acres of encroaching conifers. To help engage ranchers in the program, NRCS and its partners have identified 40 conservation practices that are benign or beneficial to sage grouse so that participating landowners will not face additional restrictions or regulations if the sage grouse joins the list of federally threatened or endangered species.

Uncertainties and complexities complicate efforts to protect at-risk species. Initiatives that integrate science and action into an adaptive decision process through collaborative efforts that engage multiple stakeholders and agencies have the potential to improve species outcomes by reducing uncertainties, improving management, and reducing stakeholder conflict. This newly emerging paradigm is often referred to as collaborative adaptive management.

A good example is the Platte River Recovery Implementation Plan, a basin-wide initiative focused on protecting four listed species. Meeting the needs of the species requires changing water flows, better managing groundwater, and land conservation measures, but water users disagreed on what actions to undertake. Participants in this effort—federal and state agencies, local landowners, the agricultural community, hydropower managers, and others—developed a collaborative adaptive management process in response to stakeholder and decisionmaker disagreements and scientific uncertainties. The process has helped participants set common goals, implement strategies to achieve those goals, and develop new information on the effectiveness of those strategies—providing a way to transcend data disagreements and uncertainties and move to actions to protect species while still providing water for other uses.

In the face of uncertainties associated with a changing climate and other land-use and demographic changes, use of collaborative adaptive management processes within the context of ESA decisionmaking can provide for ongoing learning and enable adjustments to conservation actions based on that learning. A collaborative adaptive management framework is now used to manage threatened and endangered species, but there are significant opportunities to broaden use of this kind of framework as a means of better addressing uncertainties (and scientific disagreements).

Many federal, state, and nonprofit programs support conservation planning, cross- agency coordination, and investments through grants, direct program support, and other resources, which can be leveraged for species conservation. Jointly, these programs provide significant conservation funding. For example, the 2008 farm bill includes total mandatory spending for conservation provisions of $24.3 billion over five years (2008 to 2012). These programs represent 15 percent of total farm bill spending and the most significant national sources of conservation support for stewardship of private land.

"The conservation and recovery of species will become increasingly complex in the face of climate change, water scarcity, and land fragmentation. The ESA provides an effective framework to meet these challenges."

In one such program, Salt Lake City is making payments for watershed protection, using water bill surcharges to buy watershed lands and conservation easements to protect the city’s water supplies. The city has also entered into an agreement with the US Forest Service to protect watershed lands outside of city limits. In Santa Fe, the US Forest Service and the city have partnered to reduce fuel loads in the municipal watershed, funded by water ratepayers. In Oregon’s McKenzie Watershed, the Water and Electric Board is paying farmers for reduced use of pesticides and nitrates. Although funding for these water services is not specifically directed at species conservation, there are opportunities to leverage such funding to achieve multiple goals.

The conservation and recovery of species will become increasingly complex and challenging in the face of climate change, water scarcity and variability, and land fragmentation. However, the ESA provides an effective framework to meet these challenges, particularly as efforts pivot away from a species-by-species approach and toward incorporating species protection within larger, landscape-scale efforts that use incentives to engage private landowners and nonprofit partners.

In a forthcoming RFF report, we will examine in more detail what administrative and legislative provisions as well as scientific and funding tools could further support this shift.

Visiting Scholar and Co-Director, Center for the Management of Ecological Wealth

Issues, Questions, and a Research Agenda for the Role of Pricing in Residential Electrification