This May, six of Europe’s largest oil and gas companies penned an open letter to the United Nations affirming their support for a carbon price. BG Group, BP, Eni, Shell, Statoil, and Total wrote that although they have already begun participating in carbon markets and applying “shadow” carbon prices to their investments, national governments ultimately will need to take charge of implementing carbon prices “even-handedly” to reduce “uncertainty about investment and disparities in the impact of policy on businesses.”

These potential disparities—not just among businesses, but also among households—have become a subject of increasing interest to economists, many of whom agree that pricing carbon emissions is the most efficient way to reduce greenhouse gas pollutants. Both a carbon tax and a cap-and-trade program introduce a price on carbon and, in so doing, affect different regions, businesses, and households in different ways. Both also create an asset of significant value—the tax revenues or allowances—and the distribution of that asset greatly affects who gains and who loses from carbon pricing.

We modeled the impacts of a carbon tax with three different ways to distribute the revenue and looked at the initial effects on US households.

In our new research, we modeled the impacts of a carbon tax with three different ways to distribute the revenue and looked at the initial effects on US households. Each of these could alternatively be interpreted as cap-and-trade policies with a marginal allowance price equal to the tax level, and with the allowance value used in different ways. Each scenario uses a $30 tax per ton of carbon dioxide (CO2). The policies recycle the revenue according to the following alternatives:

We then went a step further by determining the effects of these policies across US income groups as well as US states. Our results confirm that the effects of a carbon tax on energy prices are somewhat regressive, but that recycled revenue can be used to outweigh this effect.

To best illustrate the near-term effects of a carbon tax, we linked together two new models of the US economy, providing a more holistic representation than in previous literature. The first model gives an estimate of how consumer prices, wages, returns to capital, and government transfers change upon the implementation of a carbon tax. The second shows how those changes affect households across states and income groups based on changes in individual spending patterns.

We modeled a $30 tax (measured in 2012$) per ton of emissions on all fossil fuel–related CO2 emissions, under each of the three revenue-recycling scenarios. Cuts to capital and labor taxes are assumed to be onetime, permanent actions that occur at the same time as the carbon tax. Lump-sum rebates would be annual tax-free payments to each household member (regardless of age) that begin when the tax is implemented. Most policy proposals for a carbon tax have a rate that rises faster than inflation, but for simplicity, we assume that the tax rate rises at the inflation rate.

We first examined changes in welfare—measured as a percentage of annual income—across US income groups under the three revenue-recycling scenarios to understand how households experience the immediate, short-term effects of each policy (Figure 1). It’s important to note that the results omit the environmental benefits of a carbon tax resulting from reduced greenhouse gas emissions and changes in conventional air pollutants. Because the emissions reductions that do occur are very similar—though not identical—across all three policy cases, not accounting for these benefits doesn’t significantly affect the relative attractiveness of any one policy option.

We find that lump-sum rebates are the most progressive—but also the most expensive by far. Under this scenario, the three lowest-income groups actually see an increase in income (Figure 1A). For policymakers interested in internalizing the price of carbon while reducing inequality, a lump-sum program could prove popular (see Chad Stone’s article on pages 30–35 of this issue for more on the design and implementation of such a program).

Recycling the revenue to cut capital taxes is the most efficient of the three scenarios (that is, the best for the economy as a whole), but it further exacerbates the regressivity of a carbon tax by yielding a wide distribution of outcomes across income groups (Figure 1B). Under this scenario, only the wealthiest group benefits, while the poorest two groups experience the worst outcomes of the three scenarios.

Using carbon tax revenue to reduce taxes on labor can be seen as a middle-of-the-road option that is more progressive (but less efficient) than cutting capital taxes, and more efficient (but less progressive) than a lump-sum rebate (Figure 1C). The distributional effects of a labor tax cut policy are also nearly even across the income distribution as a percentage of income, which could offer a political advantage to policymakers seeking a compromise between efficiency and fairness.

Impacts across US States

We also examined differences that emerge on a state-by-state basis, finding that geographic differences are substantially smaller than the differences observed across income groups. In addition, the way carbon tax revenues are used plays a more important role in determining the geographic distribution of welfare changes than the magnitude of energy price changes. 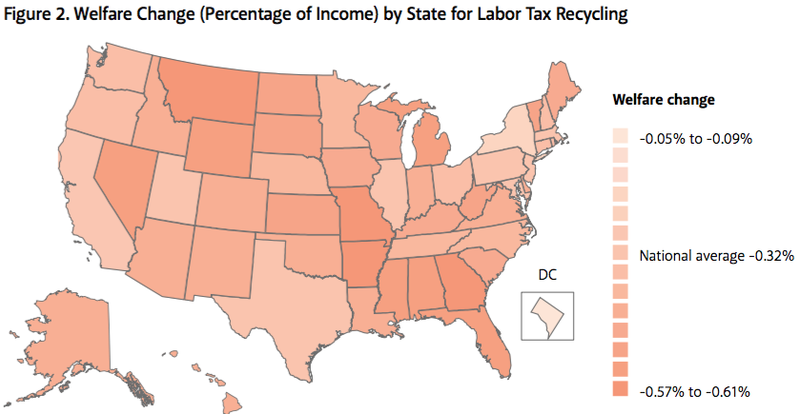 Distributional results were demonstrated as aggregate changes in welfare for each state or region as a percentage of annual income. Thus, these represent the average effect on households in each state but don’t say anything about the distribution of gains or losses among income groups within each state. The relative regressivity and efficiency rankings for each revenue recycling policy mirrored our results across income groups, with the labor tax cut scenario offering a middle-of-the-road option by narrowing geographic differences and producing a fairly even distribution of outcomes across US states (Figure 2). For politicians interested in a carbon tax, this approach could be appealing if their goal is to implement a program with welfare effects that are relatively similar, regardless of what region they represent. 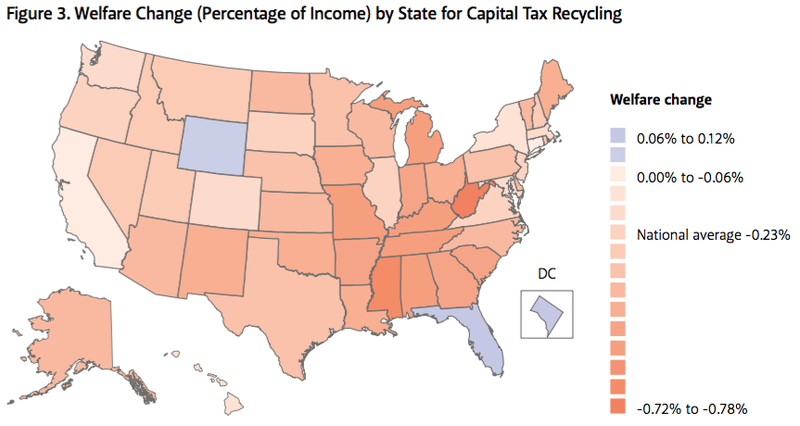 Once again, recycling revenue to reduce capital taxes proves to be the most efficient and most regressive of the three policies (Figure 3). Geographically, this method would cause the poorest states in the South and Midwest to bear a disproportionate share of the cost. 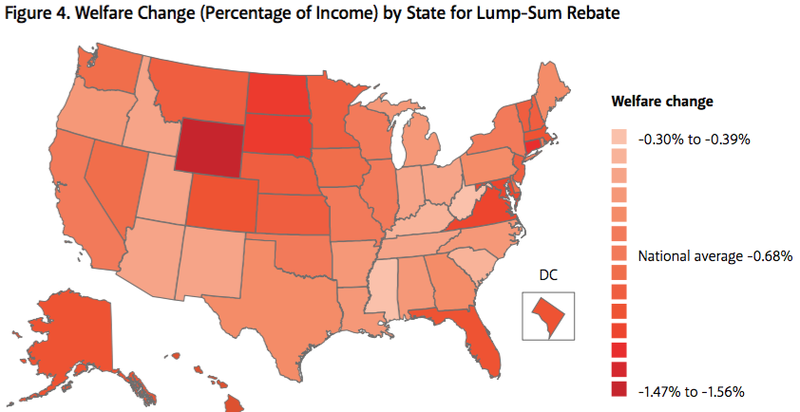 A lump-sum rebate offers the least efficient policy strategy, lowering aggregate welfare further than either labor or capital tax recycling while creating the widest gap in welfare losses across states. However, the distributional effects of lump-sum recycling are again sufficient to reverse the pattern of relative welfare drops across states (see Figure 4). This effect translates to smaller losses in southern and midwestern states than in more affluent states along the East Coast.

If policymakers could only choose one of these three options, they would pick the capital income tax swap if they cared most about total welfare, the lump-sum rebate if they cared most about what the majority would vote for or if they wanted to reduce inequality, or the labor tax swap if they wanted to have the most even effect on all income groups (or to avoid the worst-case scenario for each income group).

In reality, almost every proposal for carbon pricing divides the revenues among multiple uses. Because the lump-sum rebate produces the best comparative results for the lowest-income groups and states—those who seem to be hit hardest by changes in the price of direct energy goods—devoting part of the revenue to a lump-sum rebate would undo some of the inequality resulting from changes in the price of energy.

The Initial Incidence of a Carbon Tax across US States

The Initial Incidence of a Carbon Tax across Income Groups