The Road to Paris and Beyond: Comparing Emissions Mitigation Efforts

This year, countries will pledge to reduce their greenhouse gas emissions as part of the negotiations leading up to the UN climate change talks in Paris in December. These pledges will take on many different forms: targets as a percentage of year 1990 or 2005 emissions, percentage improvements in the ratio of carbon dioxide emissions to GDP, percentage abatement versus a “no-policy” reference case, renewable power goals, energy efficiency goals, afforestation goals, and more. Understanding the comparability of the pledged mitigation efforts will play a critical role in the negotiating process.

"Similar efforts among similar countries would likely be seen as a 'fair' deal, likely a necessary condition for broad participation now and increased ambition in the future."

Such understanding is essential to build confidence among countries and to have a common interpretation of how pledges expressed in different forms stack up against one another. Similar efforts among similar countries would likely be seen as a “fair” deal, likely a necessary condition for broad participation now and increased ambition in the future. In addition, comparable costs of mitigation efforts across countries could represent a relatively cost-effective agreement and help level the playing field internationally for energy-intensive industries.

Comparing efforts requires metrics. Yet official agreement on specific metrics and a comprehensive policy surveillance mechanism is a tall order. To help inform the difficult task ahead, we have developed a set of three basic design principles and illustrate how an array of metrics might satisfy them. Because no single metric does well in meeting all the principles, we recommend a portfolio approach that assesses countries’ estimated emissions levels, emissions abatement, carbon and energy price effects, and costs of implementation.

We identified three principles to help pinpoint which metrics to use in comparing nations’ mitigation efforts.

In practice, there will be trade-offs among principles in identifying and constructing metrics. For example, changes in emissions levels over time may be measurable and universally available in all countries, but this measure may not comprehensively represent mitigation effort. Mitigation cost may be a more comprehensive measure of effort but is not easily measured.

Mitigation efforts can be measured many different ways, and the nations of the world are far from agreeing on a single way to do so. But the strengths and weaknesses of popular metrics begin to emerge when we examine how they stack up against our basic principles. These metrics fall into three general categories: those that focus on emissions, prices, and costs. Emissions (and other physical measures) are typically the outcomes that matter for the environment. Energy prices reflect the economic incentives to reduce emissions and energy use. Carbon prices and energy taxes reflect the particular incentives created by government policies. Cost metrics measure useful economic resources diverted away from current consumption and non-climate investment and toward abatement.

The concept of comparable effort has evolved over the past several decades in international climate change negotiations. The 1992 UN Framework Convention on Climate Change and the 1997 Kyoto Protocol set emissions targets for developed countries and established the first and most enduring notion of comparability: emissions relative to a 1990 base year. By defining quantitative emissions limits this way, particularly in the Kyoto Protocol, negotiators effectively defined effort as the percentage reductions in emissions relative to 1990. This turned out to be a simplistic and potentially misleading approach that fails to distinguish between intentional reductions and those achieved by chance. For example, Russia’s emissions have remained well below 1990 levels since the Kyoto agreement due to the state of its economy, not a broad and effective emissions mitigation program.

The term “comparability of effort” first emerged explicitly in the text of the 2007 Bali Action Plan, which noted that the concept should guide consideration of developed countries’ emissions mitigation efforts. Then, at the 2009 UN climate talks in Copenhagen, the European Union and Japan each announced a willingness to implement more ambitious domestic emissions targets if other developed countries committed to “comparable” reductions. But different countries held different perspectives on how to measure and compare effort—and whether to also include the pledges by the fast-growing emerging economies, such as China and India. To promote the transparency of these mitigation pledges and facilitate a better understanding of effort, the Copenhagen Accord and the 2010 Cancun Agreements called for “international consultations and analysis” and “measurement, reporting, and verification”—review mechanisms comprising reporting, technical analysis, and a period of consultation with other parties.

The emerging international climate architecture reflected in decisions at the 2014 Lima climate talks further advanced the concept of pledge and review, building on the Copenhagen model. A number of countries, including the United States, have already tabled their mitigation pledges, referred to as “intended nationally determined contributions” (INDCs) in the negotiations, and more are expected to do so over the course of this year. The Lima Call for Climate Action notes that, through this pledge process, countries may submit additional information, including data, analysis, methods, and descriptions of implementation policies that may promote the transparency and credibility of countries’ INDCs.

This evolution illustrates how economics can inform the implementation of the concept of comparability of mitigation effort. In the 2009 Copenhagen Accord and in what is expected for Paris, countries’ emissions mitigation pledges take on different forms. A negotiator can no longer do a simple accounting like the one required in the 1997 Kyoto talks. Instead, economic data and analysis will be necessary to determine the credibility of countries’ pledges.

No single metric scores well against all the principles. Those that are easily measured—emissions levels and intensity compared to historic levels—do not discriminate between effort and happenstance. Prices provide an observable snapshot for certain policies but not others. Emissions abatement and abatement costs probably best represent effort but require subjective assumptions and modeling to estimate. Credible differences in opinion over assumptions will produce different results, complicating any comparison and reducing confidence. The necessary modeling tools are also quite limited outside the largest developed and developing countries.

With this in mind, we recommend a portfolio of metrics. Such an approach would mirror how analysts describe the health of the macroeconomy with a suite of economic statistics that includes GDP, the unemployment rate, the inflation rate, and interest rates.

Reviewing Pledges on the Road to Paris and Beyond

Analyses that compare climate change pledges and actions across countries are increasingly relevant as we transition to unilateral pledges of domestic action and policy within international negotiations. The emerging architecture calls for countries to state what they intend to do, form views about the adequacy of each other’s efforts, and react accordingly as they implement policies and make further pledges in the future.

No single metric comprehensively measures effort, is easily measured, and is universally available for all countries. Moreover, each country will prefer measures that improve its appearance. This makes it unlikely that an official metric will emerge. Instead, countries will advertise and utilize the metrics they prefer. Analysis is necessary to translate among metrics, particularly those that are harder to measure.

Compiling data and conducting this analysis of metrics will require a serious, transparent, and legitimate process. Although an official surveillance process may be years away, independent researchers can fill the gap. An array of metrics could be developed alongside data collected by existing international organizations to facilitate comparisons. Unofficial but independent expert analysis could further synthesize these data to estimate metrics that require forecasts and modeling. In turn, stakeholders and other users could provide feedback on the feasibility, integrity, and precision of available metrics and estimates. This would enable further refinement and improved estimates going forward. Given that Paris is just the beginning of an ongoing process of policy commitments, these refinements and improvements can ultimately feed into greater confidence and stronger ambition among all countries. 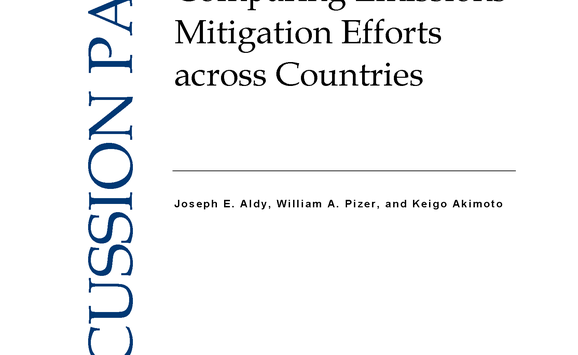