Karen Palmer and Margaret A. Walls

Building scientists and energy efficiency experts have a message for homeowners: plenty of cost-effective improvements exist to lower your energy bills, from simple weather stripping and air sealing to appliance upgrades. But many homeowners don’t know where to begin. They might know they have an old furnace, but they have no idea how effective the attic insulation is, where the air leaks in the house are, and which improvements are likely to pay off.

This is where home energy audits come in. A professional can determine where a house is losing energy and how to correct the problem. Yet only about 4 percent of the homeowners surveyed in the US Department of Energy’s 2009 Residential Energy Consumption Survey reported having an audit recently. Even among people who have had audits, the follow-up with improvements is usually incomplete. If energy efficiency investments pay for themselves in energy savings, why aren’t more homeowners taking advantage of these opportunities?

We recently surveyed 1,784 homeowners across 24 states to help answer this question. A total of 566 respondents said they had an audit in the past four years. (This percentage differs from the national average because our survey technique involved a stratified sampling approach to ensure we got a large enough number of people with audits to be able to statistically analyze the data.)

Of those who hadn’t had an audit, 29 percent said they had “never heard of them,” and 16 percent said that they “had heard of them but didn’t know anything about them.” This finding alone suggests that consumers are lacking the information they need to make wise energy efficiency decisions

The Costs and Quality of Home Energy Audits

During a typical home energy assessment, auditors look for air leaks all around the home; evaluate air ducts for leaks; assess insulation in the attic, crawlspace, walls, and around pipes; and evaluate heating, air conditioning, and water heating equipment. They may use special techniques, such as a blower door test to manipulate air pressure in the house and draw air through unsealed cracks and openings, and infrared imaging to show where heat is escaping. These and other services are listed in Figure 1.

To assess the quality of the audits they received, we asked the respondents who had audits which of these services the auditors’ assessments included. As seen in Figure 1, almost 80 percent of respon­dents reported that their auditor “personally showed them trouble spots,” but only 26 percent were provided photos of the trouble spots.

Only 64 percent of homeowners reported that their audit involved a blower door test, which is standard practice for a quality home energy audit and required by the Building Performance Institute (BPI), a national standards development and credentialing organization for residential energy-efficiency retrofit work. In fact, in our previous survey of home energy auditors (see Further Reading), 91 percent reported that they use blower door tests fairly often or always. Similarly, 80 percent of auditors in that survey said that they analyze past energy bills fairly often or always, and 63 percent said they use infra­red imaging fairly often or always. In this survey of homeowners, the corresponding numbers are 64 percent and 56 percent. What explains the discrepancy? All the auditors in the earlier survey were BPI certi­fied and many were members of Efficiency First, a trade association that develops best practices and advocates for the home energy efficiency workforce. Our current survey seems to suggest that many home-owners may be using auditors who are not BPI certified. Certainly it shows that not all auditors are using the same techniques and performing the same services. People in our two pre-survey focus groups also reported quite different audit experiences.

We also asked homeowners in our survey how much they paid for their audits and got some unexpected responses. Almost 70 percent received their audits for free. However, in our survey of auditors, the average price was $349. Thus, most home­owners in our sample received heavily subsidized audits. These subsidies could come from utilities or from local govern­ment programs to promote energy efficiency. It’s also possible that some survey respondents could be part of the federal Weatherization Assistance Program, which provides free audits and free or heavily discounted energy improvements and retro­fits to income-eligible households. However, the income levels of the respondents in our survey who reported paying zero are mostly too high to qualify for this program.

Are these free audits different from the paid ones? We looked into this, and the answer is yes. Among respondents who paid for their audits, 83 percent had a blow­er door test compared to only 55 percent of those who got the audit for free. And 71 percent of paid audits included infrared imaging, while only 51 percent of free audits incorporated this test. Similar results show up for analyzing bills, showing pictures, and other such techniques.

Taking Advice: Do Homeowners Follow Up on Home Energy Audits?

Given these differences, subsidies might not be serving their intended purpose to induce energy-efficient changes: our survey reveals that audit quality, as measured by the tech­niques and services included in Figure 1, has a considerable effect on whether home­owners follow auditors’ recommendations. Other factors, such as procrastination and cost, also play a large role.

The two most common recommenda­tions from home energy audits are to seal air gaps and add insulation. Air gaps are often identified during an audit using a blower door test and can be around windows and doors, in attics, and in many nooks and crannies of the home. The most common area for insulation is the attic, but ideally crawlspaces, walls, and pipes are also insulated.

Audit follow-up appears to vary with the quality of the audit. Figure 2 shows that follow-up on insulation recommendations is higher when the audit includes special tests and services that are indicators of higher quality; the results are similar for air sealing. A few of these features are associ­ated with a difference that is statistically significant: a blower door test, personally showing the homeowner where changes need to be made, and providing estimates of energy savings. 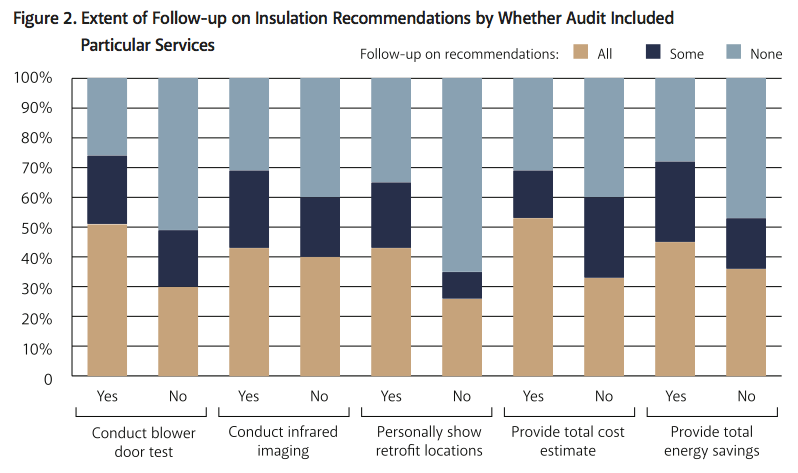 What are the main reasons people report for not taking their auditors’ advice? Procrastination seems to be the most important reason: nearly 50 percent of homeowners said the main reason for their failure to seal air gaps was that they “had not gotten around to it,” with a slightly smaller percentage saying the same for recommendations about insulation. Insuf­ficient energy savings is the second most cited reason for failure to do air sealing, while insufficient savings and high cost of improvements are equally cited as reasons for not adding insulation.

Do homeowners find that audits are useful? We asked homeowners to rate the quality of the information in their home energy audit on a scale of 1 to 10, where higher numbers mean greater satisfaction. The mean and median rating across respon­dents was 7. This seems pretty high to us. However, the responses varied widely: while 12 percent gave a rating of 10, 4 percent gave a 1 or a 2, and about 11 percent rated their audit below 5.

Perhaps a better indication of the level of satisfaction is whether a homeowner has recommended getting an audit to others. Though homeowners claim to think highly of their audits, at least based on the numerical rating, only 45 percent reported that they had recommended home energy audits to others, and only about one-third recommended the actual auditor they used.

The Importance of Salience and Attentiveness in Energy Decisions

As economists, we like to think that, by and large, people make decisions based on a rational accounting of costs and benefits. In the case of home energy audits, home­owners are paying for information that should allow them to make better energy investment decisions. If the benefits of that information outweigh the costs of acquiring it, we would expect them to spend the money for an audit.

But recent research on behavior and energy efficiency suggests that many other factors come into play in people’s decisions about energy use and related investments in appliances, equipment, and buildings. The salience of energy costs and attentiveness to energy usage are two important factors identified by many researchers. In our survey, we asked some questions related to energy attentiveness and salience, and the data hint that some of these factors may influence the decision process.

One class of variables associated with the decision to get an audit pertains to home­owners’ awareness of the energy-related features of their houses. Homeowners in our survey who had audits were more likely to know the age of their heating systems (at the time of the audit) than homeowners who had not had audits. They were also more likely to have a general idea of their annual total energy expenditures and especially more likely to know how much attic insulation they had.

People who had audits were also more likely to service their heating and AC equipment regularly and set their monthly elec­tricity bill to be paid based on an annual average level of monthly use (to avoid month-to-month fluctuations). They were also more likely to have received a home energy report—a letter, usually from the local utility, comparing their home’s energy use to that of other, similar houses.

Between homeowners in our survey who had audits and those who hadn’t, we saw the sharpest contrast in the number of friends or neighbors that each group said they knew had had audits. Among the non-audit respondents, only 7 percent said that they knew someone whose home had been audited. In contrast, almost 50 percent of the respondents who had an audit said they knew one or more persons whose home had been audited prior to having theirs (Figure 3). Among those who had had audits, 21 percent knew one other person who had an audit, 21 percent knew two or three people, and nearly 6 percent knew more than three. 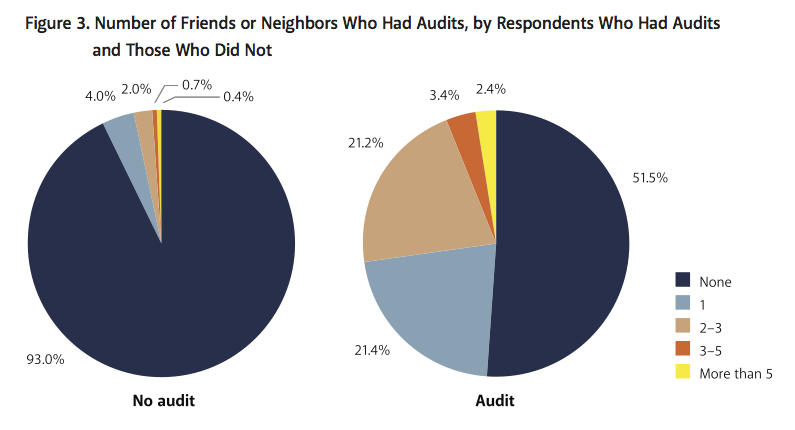 We cannot conclude from this preliminary look at the survey data that attentiveness to one’s house and energy use or cues, such as receiving a home energy report, spurs people to get an audit. But the associations we are seeing, especially in light of previous research, reinforce the need to dig into this possibility more deeply.

If our planned in-depth analysis reveals that attentiveness and cues do indeed affect audit uptake, there could be impor­tant policy implications. Subsidies and other financial incentives for audits may have limited effects in the absence of comple­mentary information programs that make energy use more salient to homeowners. Or it might be important to combine financial incentives with deadlines. Another option may be a series of cues to jog people’s memories. Conducting careful field experi­ments around some of these options could provide useful information as to what works. Our survey should provide guidance for such experiments.

This article originally appeared as a three-part series on RFF’s blog, Common Resources.