Cap and Trade in China: How Might It Work?

China plans to start a nationwide cap-and-trade market in 2016. But can China, whose economy still contains many nonmarket features, properly design and implement a fundamentally market-based policy? In our new RFF discussion paper, my coauthors (RFF’s Richard Morgenstern, Zhongmin Wang, and Xu Liu) and I attempt to answer this question by examining cap-and-trade pilot programs in Shanghai, Shenzhen, and Guangdong that have each operated in China for over a year.

We find that some designs in the pilots represent a deft tailoring of cap and trade to China’s unique political economy. For example, most cap-and-trade designs outside of China require electricity producers to retire allowances and pass allowance costs through to electricity consumers in the form of higher prices; this pass-through ensures that the whole electricity sector (producers and consumers) faces prices that reflect the cost of carbon. In China, however, the government heavily regulates electricity prices and rarely allows those prices to increase—which virtually precludes the pass through of allowance costs. This constraint threatens to keep a carbon price signal from reaching electricity consumers, potentially leaving low-cost abatement opportunities on the table.

Yet regulators in Shanghai, Shenzhen, and Guangdong crafted a policy that replicates the pass-through of allowance costs. The pilots require that both electricity producers and electricity consumers retire allowances. Under this arrangement, these pilot programs require certain large consumers of electricity—for example, big office buildings and hotels—to obtain and retire allowances for the tons of carbon associated with their electricity purchases. Although it is an unusual design compared to most cap-and-trade programs, this decision allows for communication of the carbon price signal to consumers in China—bringing cheap reductions online and helping to restore the overall efficiency of the pilot programs.

We also find that China’s political economy causes many design deficiencies in the cap-and-trade pilots that threaten their effectiveness.  Most cap-and-trade programs outside of China, for example, contain strong laws that impose substantial fees for non-compliance. In China, however, law is more hierarchal, with national laws and regulations typically superseding local ones. To date, no Chinese national law or regulation mentions cap and trade, let alone establishes penalties for non-compliance. Without a clear signal from the national government, some regulated entities have questioned whether the pilots generally have the authority to impose non-compliance fees. We recommend that Chinese policymakers at the national level craft a law that explicitly states that entities regulated by a cap-and-trade program are subject to strict non-compliance penalties.

Additional barriers exist to optimal design and implementation of a cap-and-trade program in China. Although it is clear that pilot regulators, in some instances, have cleverly tailored cap and trade to their particular circumstances, many challenges still exist. Read more in our full discussion paper, where we make nine recommendations to improve the prospects for China’s cap-and-trade pilot programs in order to inform the construction of the country’s nationwide program. 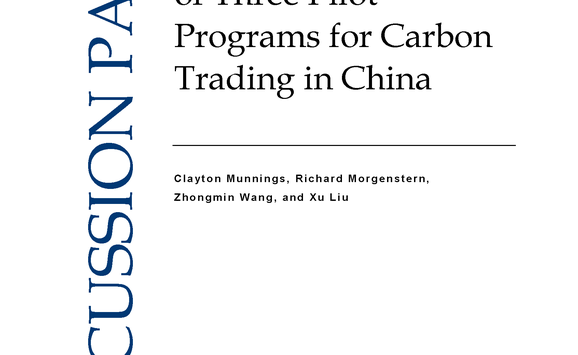