Ending the Export Ban: What It Means for US Gasoline Prices 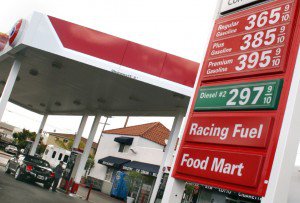 Last week, top Democrats on the Senate Energy and Natural Resources Committee requested a comprehensive review of what would happen—in terms of energy prices, consumer prices, and more—if the US were to lift its ban on oil exports. In a new RFF issue brief, together with Stephen Brown, Charles Mason, and Jan Mares, we tackle one of the most talked-about questions: What would happen to domestic gasoline prices were that export ban to be lifted?

The export ban has been a hot topic ever since the rapid increase in oil production of light sweet crude in the Bakken, Eagle Ford, and Permian basins began to cause bottlenecks in the US oil distribution system and mismatches between refinery capabilities and the characteristics of the oil being produced. Although the United States has considerable oil refinery capacity, most of it is currently maximized to refine medium crudes or heavy, sour crude of the kind generally produced in the United States and imported. And its distribution system has increasingly had to rely on rail and water conveyance with the pipeline system playing catch up.

The US has adjusted to these mismatches in various ways.  We’ve backed out nearly all imports of light, sweet crude from other countries. We’ve starting exporting more such crude to Canada than we already had been, and we’re moving oil to refineries optimized for the light, sweet crude on the East Coast. 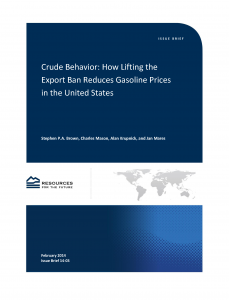 But some experts believe that we’re nearing a “saturation point” (to quote Kevin Book from ClearView Energy Partners, speaking at a recent panel discussion at the Center for Strategic and International Studies), where the US has taken advantage of all economic avenues for using our light, sweet crude. And what then? The often-suggested answer: lift the export ban so the oil can flow more freely into the global market, including to countries that already have refining capacity for this oil.

As noted in the issue brief, there are competing viewpoints on the merits of lifting the ban. It would increase market efficiency importantly by eliminating bottlenecks; it would almost certainly be good for the oil production companies; the additional demand for US light crude oil will increase profits, (although have little effect on prices because oil is priced in a world market). It would also improve our trade balance and provide the United States with greater geopolitical leverage. There would be negatives, too—if world oil production increased on net, taking greenhouse gas emissions along with it.

But the area of greatest and most specific disagreement concerns the effect of lifting the export ban on US gasoline prices—an area of concern in communities across the country, as well as in political discussions.

Our approach relied on an analysis of oil price differences across the country and a small, static simulation model of the oil and refined product markets developed by our coauthor, Steve Brown. Our basic finding is that the efficiency of global refinery operations would be improved a little if the ban on US exports of crude oil were to be lifted. And, accordingly, gasoline production would go up and its price in the United States would fall—anywhere from 3 to 7 cents per gallon once the economy could adjust to lifting the ban. This range could be a bit broader depending on assumed price elasticities of supply and demand and other factors.

One big question is how OPEC countries would respond if the United States were to lift the export ban. We also explore this topic in the issue brief, considering a range of possible responses. But in truth, no one has yet figured out a way to predict OPEC behavior, so we can only speculate on what might happen, but conclude that oil price changes as the result of OPEC activity would be slight in any event.

In short, there are a number of issues to consider in whether or not the United States lifts its crude oil export ban, but any domestic gasoline price impacts are likely to be small, but beneficial to consumers.