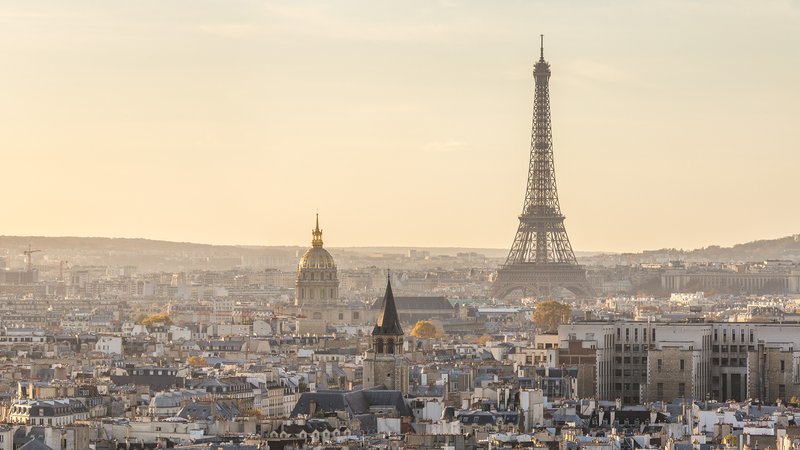 According to the Washington Post and Fox Business News, members of the Trump administration met last Thursday to debate whether the United States would remain party to the Paris climate agreement or “cancel” the agreement as promised by Trump while on the campaign trail. The media (and the Washington Post story in particular) have focused on two camps within the administration with opposing views on how to proceed. On one side, supporting the agreement, sit Secretary of State Rex Tillerson and senior White House adviser Jared Kushner. On the other, particularly opposed, are US Environmental Protection Agency (EPA) Administrator Scott Pruitt and Stephen Bannon, the president’s chief strategist. Others, such as Secretary of Energy Rick Perry, appear to support remaining in the agreement but suggest the accord should be “renegotiated”.

Simmering tensions in the White House and ongoing media coverage aside, it is my belief that—in terms of future US greenhouse gas emissions—the decision about whether or not to stay in the Paris Agreement is largely symbolic. (Of course, any decision to exit the agreement—or alternatively, exiting the United Nations Framework Convention on Climate Change [UNFCCC] entirely—will have consequences for the United States and the international community, but those are beyond the expertise of this author and scope of this post.)

For starters, the Paris Agreement is non-binding. Countries submit pledges, but there is no mechanism to punish countries that fail to achieve their targets (making the reasoning behind the Rick Perry strategy unclear). National policies that either promote fossil fuels or rescind Obama-era environmental regulations are far more important to future emissions in the United States. Even before last week’s White House meeting on Paris took place, actions taken by President Trump in his first 100 days in office will likely lead to higher emissions over the next decade.

Table 1 displays historical and projected greenhouse gas emissions from the United States. (Note: Projected emissions in 2025 and corresponding reductions relative to 2005 under the Obama administration’s policies are from the Department of State’s Second Biennial Report of the United States under the UNFCCC and the Energy Information Administration’s Annual Energy Outlook 2016.  See Table 2 for a detailed breakdown of projections.) The “Obama Law” column represents projections under current law, including the Clean Power Plan, as of the date of publication of the State Department’s report in December 2015. Under this scenario, emissions were projected to be 12 to 14 percent below 2005 levels, depending on assumptions regarding changes in emissions sequestration through land use, land use changes, and forestry.

In 2016, the Obama administration proposed additional regulations and aimed to finalize other rules to further reduce emissions—including heavy-duty vehicle fuel economy standards; increased efficiency standards for appliances, equipment, and buildings; regulations restricting methane emissions on federal lands; landfill gas regulations; and EPA’s SNAP program to reduce hydrofluorocarbons (HFC) emissions. The State Department provided two estimates (low and high) for reductions due to these additional regulations. Under these policies, emissions were expected to be 17 percent below 2005 levels with no sequestration changes and conservative assumptions for further reductions. However, emissions would be almost 25 percent below 2005 levels under the high sequestration estimates and the most optimistic assumptions for additional reductions. The Obama-era projections show exactly why the Paris targets are symbolic—only under the rosiest assumptions would emissions even come close to the Obama 2025 Paris pledge (26-28 percent below 2005 by 2025).

Emissions under the best-case scenario for Trump are expected to be much higher by comparison. With the help of the Republican-led Congress, the Trump administration has or will soon rescind a vast majority of all regulations listed in the table under “Additional Obama Regulations,” through executive orders and the Congressional Review Act. I’ve only included reductions through EPA’s SNAP program for HFC emissions under Trump’s best-case scenario as the global agreement to reduce HFC’s would prohibit the export of US appliances if the United States does not comply. Further, the Trump administration has issued a review of the Clean Power Plan. At this time, the outcome of that review remains unclear but the stated goal of the review is to “as soon as practicable, suspend, revise, or rescind the guidance” and therefore I have excluded projected Clean Power Plan emissions reductions from the best-case scenario. 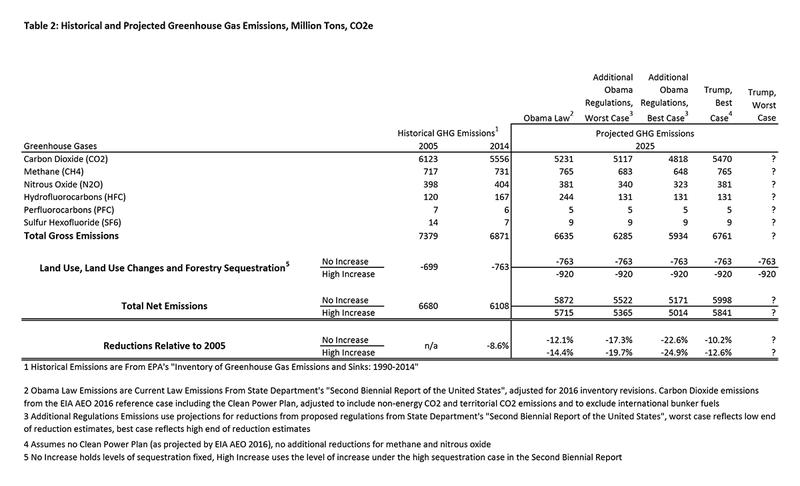 What is the worst-case scenario for emissions trends under Trump? Unfortunately, we simply do not have enough information to make such predictions. With a number of reasonable assumptions, emissions could be expected to increase even more due to policies pursued by Trump. For example, he could target additional existing laws aimed at reducing emissions. Policies aimed at opening up new federal lands for fossil-fuel production could also lead to increased energy consumption through lower prices. And, although seemingly unrelated at a glance, if tax reform passes and increases economic growth, emissions would also be expected to increase, all else equal.

From this relatively simple analysis, the policies enacted by the Trump administration in its first 100 days can reasonably be expected to increase future emissions, regardless of whatever the president decides to do about the Paris climate agreement. However, considerable uncertainty still exists regarding future policies related to energy and the environment under President Trump—only time will reveal the true Trump effect on climate.

It remains this author’s strong opinion that a federal economy-wide carbon tax is the best option to cost-effectively achieve emissions targets akin to the US pledge under the Paris Agreement.

Using a Carbon Tax to Meet US International Climate Pledges