Should We Price the Carbon From Federal Coal?

Conversations in the United States about policies to reduce emissions from fossil fuels have normally focused on a number of “downstream” approaches that target the end or intermediate users of fossil fuels. Notably, the US Environmental Protection Agency’s proposed Clean Power Plan addresses emissions from existing electric power plants, and fuel economy standards are reaching for a 50 percent reduction of carbon dioxide (CO2) emissions from the transportation sector.

As an alternative to developing a large number of these downstream policies, an “upstream” approach—targeting fossil fuels as they come out of the ground—might be a better way to go. Such an option recently appeared in a New York Times op-ed and some policymakers are already thinking along these lines. Congressman Jim McDermott (D-WA/7th) recently introduced a bill (H.R. 972) that would require fuel producers and importers to purchase emissions permits. In 2014, Senators Whitehouse (D-RI) and Schatz (D-HI) released draft legislation calling for an upstream carbon tax on all fossil fuels. Even though a new law might not actually be necessary to start implementing upstream regulation, the current timing for such an approach may be right. Sally Jewell, secretary of the US Department of the Interior, recently stated, “What are we doing to achieve a low carbon future? . . . Our task by the end of this administration is to put in place common-sense reforms that promote good government and help define the rules of the road for America’s energy future on our public lands.”

In a new RFF discussion paper, we take a look at coal. Forty percent of US coal is produced on federal land managed by the Bureau of Land Management (BLM). We examine whether BLM could—and perhaps should—impose an upstream carbon charge on this production. Because coal is the most carbon-intensive of fossil fuels, and because our research shows a significant discrepancy between the price of coal from federal lands (around $12 per ton) and the estimated global damages of coal (around $94 per ton, given the administration’s middle estimate of around $46 per ton of CO2 for 2020), federal coal seems like a logical target for launching a carbon pricing policy. (The $46 estimate emerges from research into the social cost of carbon conducted by a series of interagency groups. See further comments below).

Such a policy would signal the Obama administration’s intent on reducing CO2 emissions (especially beyond what may or may not be achieved via the Clean Power Plan). And, it would set the precedent for a future, more substantive (and broadly applied) upstream charge on emissions.

Our legal analysis reveals that BLM does have the statutory authority and regulatory ability to increase royalty payments on new coal leases to account for externalities related to CO2 emissions. We refer specifically to new leases because BLM probably could not impose a charge all at once, but rather only on new leases or as current 20-year leases expire and are renewed. To be sure, our confidence in BLM’s legal position comes with a non-trivial disclaimer: BLM is charged by law with balancing multiple uses of federal lands, including mining (and the associated generation of federal revenue). Although the courts will generally defer to BLM’s balancing of uses, climate-driven policy that would stop new federal coal mining (or nearly so) would invite tough judicial scrutiny in response to the inevitable lawsuits.

However, whereas the legal case for an upstream carbon pricing program under BLM seems fairly strong, the economic case appears noticeably weaker. Because most government coal leases have only one bidder, bid prices for the land might be reduced to account for the greater royalty rate. At the same time, depending on the competitiveness of the coal market, operators on federal land might have to absorb the carbon charge in lower profits. Both cases would result in no change in the coal price (and therefore no internalization of the related climate externalities). The effectiveness of a significant charge upstream also would be weakened because 60 percent of US coal is not produced on federal lands. That said, market demand for non-federal coal would likely rise if a significant carbon charge were implemented on federal coal, partly mitigating any price increases. Further research is needed to determine how much production would potentially shift away from federal lands to private, state, and tribal lands and what the impact would be on coal prices.

Interactions with downstream policies also must be carefully considered. Notably, double-counting must be avoided. Two prominent policies are the Clean Power Plan, noted above, and the Mercury and Air Toxics Standards (MATS) program. The Clean Power Plan would internalize at least part of the climate change externalities from coal, so care must be taken that the combined policies don’t put too high a premium on coal prices. At the same time, a rise in the coal price from a carbon charge might make the goal of the Clean Power Plan easier to attain. As for MATS, reducing mercury emissions could become more expensive, because the cheapest approach to reducing mercury relies on low-sulfur coal, much of which is on federal land.

We did not focus on the appropriate size of the ultimate carbon charge in our research, but a motivating starting point could be the social cost of carbon estimates, mentioned earlier. In this case, and using the midrange of these estimates for 2020 of about $46 per ton of CO2, the carbon charge would be over $90 per ton of coal, far above the current price of federal Powder River Basin coal ($12 per ton). The implication is that without a long transition period (one that could occur somewhat “naturally” if the charge was levied only on newly leased coal, as we believe existing leases cannot be reopened), this approach could be highly disruptive to the coal market, the electricity market, and the economy as a whole.

However, there is another approach that BLM could take—considering and applying the social cost of carbon in its planning processes—that might mitigate some of the judicial scrutiny involved with its mandate for managing multiple uses of the land. A follow-up blog post, coming soon, describes this option in greater detail.

Should We Price Carbon from Federal Coal?

Using the Social Cost of Carbon in the Bureau of Land Management’s Planning: An Opportunity for a Carbon Price? 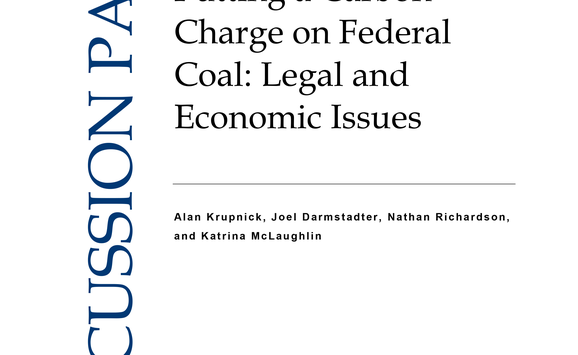