Building on its catalogue of work related to shale oil and gas development, Resources for the Future is leading a multi-state analysis of K-12 public school finance and education outcomes in shale oil and gas regions. Nathan Ratledge recently traveled to Montana and North Dakota to get on-the-ground insights from teachers, staff, administrators, school board officials, and nonprofit stakeholders.

Much of the current literature on public education outcomes in energy boom regions has focused on the potential impacts to adult educational attainment and a concern of increased high school dropout rates. I inquired about dropout rates during my recent visits to Montana and North Dakota, particularly in the Bakken region of North Dakota—a true-blue American boomtown. However, school administrators pointed me toward elementary schools as the most affected from such booms.

Most school administrators in North Dakota said they did not see a spike in high school dropout rates during the shale boom; others reported a potentially small increase. Generally, there was agreement that this dropout trend differed from the oil boom of the 1980s. Many explained that, in contrast to the 1980s, today’s shale development requires a higher skill set for field workers. Others referenced a policy that discourages hiring workers without a diploma or a GED.

Administrators instead pointed to elementary grades, citing rapid growth and heightened student mobility among primary school students during the shale boom. Interviews with teachers in oil producing regions offered similar insights. Back in the office at RFF, we looked at statewide data to see if these observations showed up across North Dakota.

We first compared dropout data from the North Dakota Department of Education (DEP) and the US Department of Education’s National Center for Education Statistics (NCES). The DEP and NCES employ different methods to calculate dropout rates—a “cohort rate” is used by DEP and an “event rate” is used by NCES. Based on different implied trends, it is difficult to comment expressly on the administrators’ observations without deeper analysis. However, student population data very clearly corroborate the observed trends in elementary grades.

The following three figures compare the change in student populations between 1993 and 2015 in 18 school districts located in the core oil-producing Bakken region against those in the roughly 200 remaining districts in North Dakota. Broadly, the core producing districts and the rest of the state saw declining student populations through the mid-2000s. Figure 1 shows how the rapid increase in North Dakota’s oil production in 2009 correlates closely with the rise of K-12 student enrollment in core producing regions, whereas enrollment in the rest of the state remain relatively flat. 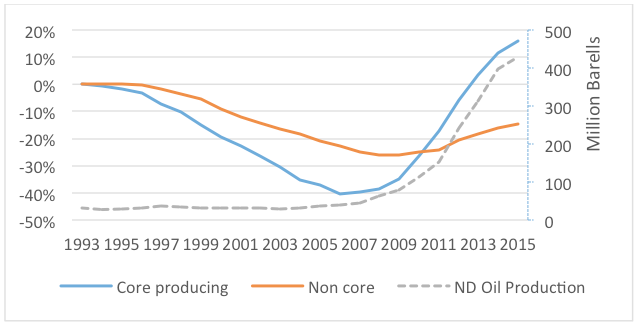 A closer look, illustrated in Figures 2 and 3, shows that the growth in elementary grade student populations far exceeded changes at the high school level. By 2015, high schools in core producing regions approached their population highs of the late 1990s. In contrast, elementary-aged student populations hovered more than 20 percent above their historic highs. Interestingly, kindergarten had the highest growth rate of all, expanding 32 percent above 1993 levels. 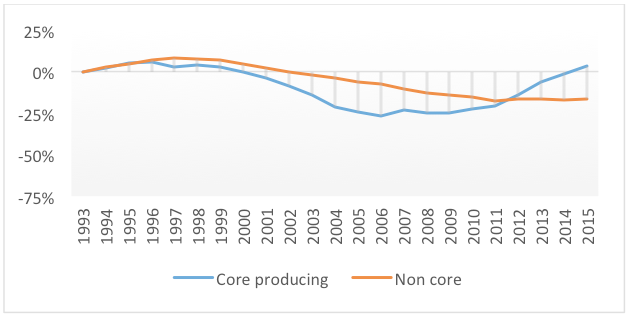 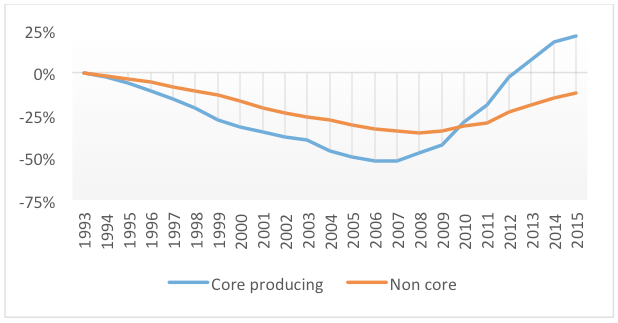 This recent phenomenon is perhaps not all that surprising. The first phase of shale development requires a younger workforce to drill wells and man rigs. This early crop of workers, typically men in their twenties and thirties, are more likely to have five-, six-, and seven-year-olds than teenagers. From our interviews, we also learned that some workers left older children “at home” to finish high school.

Teachers and administrators also made us aware of an issue that will be harder to extract from the district-level data—that of higher intra-year student mobility (or turnover). Enrollment numbers quantify full-time-equivalent students at the beginning or end of the school year, but they don’t capture those that move through the revolving door that occurs throughout the year.

For example, interviews suggested that for a school that reports that 20 new students arrived in a given year, in actuality there were likely far more new students both enrolling and leaving that school. Full-time-equivalent data fail to capture these disruptions and thus likely underestimate new arrivals. Some teachers even mentioned that they had certain students leave in the fall only to return in the spring when drilling resumed after the winter.

Although further analysis is needed to determine the effect of the oil boom on high school dropout rates, the occurrence of rapid elementary student growth and high mobility rates in elementary-aged students is additive to the historic literature. Teachers and administrators noted some positives from increased diversity and growth within the student body. However, rapid student in-migration also raises concerns regarding classroom and curriculum disruption, teacher fatigue, and long-term educational attainment, particularly for highly mobile students.

We’ll be looking further into these effects as the research moves forward. Specifically, our forthcoming statistical analysis is designed to shed light on the causation between oil development and dependent variables like dropout rates and student achievement, rather than the correlation shown here.