Complying with the CAFE Standards: Will It Be More Difficult than Predicted?

This is the fifth of five posts in the RFF blog series, Evidence for the New CAFE Standards, examining key issues related to trends in the evidence regarding the efficiency and effectiveness of the new Corporate Average Fuel Economy (CAFE) standards. The series follows an expert panel discussion at a related RFF First Wednesday Seminar, The Evolving US Vehicle Fleet: Responding to New Federal Regulations.

Recent reports from the National Academy of Sciences (NAS) and the Environmental Protection Agency (EPA) on fuel efficiency technology for cars and light trucks argue that the 2020 and 2025 Corporate Average Fuel Economy (CAFE) standards can be met with conventional gasoline engines and little reliance on hybrid and electric vehicles. Yet our recent analysis of manufacturers’ product plans here at H-D Systems suggest that a large number of new hybrid and electric models must be introduced in the near future in order for firms to comply, despite low gas prices and falling hybrid vehicle sales. Manufacturers have also stated that their internal calculations show significant hybrid and electric vehicle sales will be required for compliance.

Why this difference in views about how the standards will be met? The forecasts look at average vehicles, but, in practice, consumers have different options.

The current CAFE standards are based on size (or, more accurately, the footprint of the vehicle).The standard for a midsize car with a footprint of 46 square feet is about 36 miles per gallon (mpg) in 2016. In the NAS report, the representative midsize car that starts at 36.6 mpg in 2016 (see figure below) is forecast to attain 54.2 mpg for 2025 with conventional technology improvements alone. In our analysis of compliance paths at H-D Systems, we were able to derive a similar result for the base midsize car that starts at 36.6 mpg. The problem, however, is that this car is the “basic” model and not the model that best reflects what consumers want to buy.

In reality, the same model is usually offered in one or more “high line” versions with a V6 engine and more options, such as four-wheel drive—all of which significantly lower fuel economy (by 10 to 20 percent) relative to the base model. For example, in 2016, different versions of the Honda Accord achieve between 22 and 31 mpg. 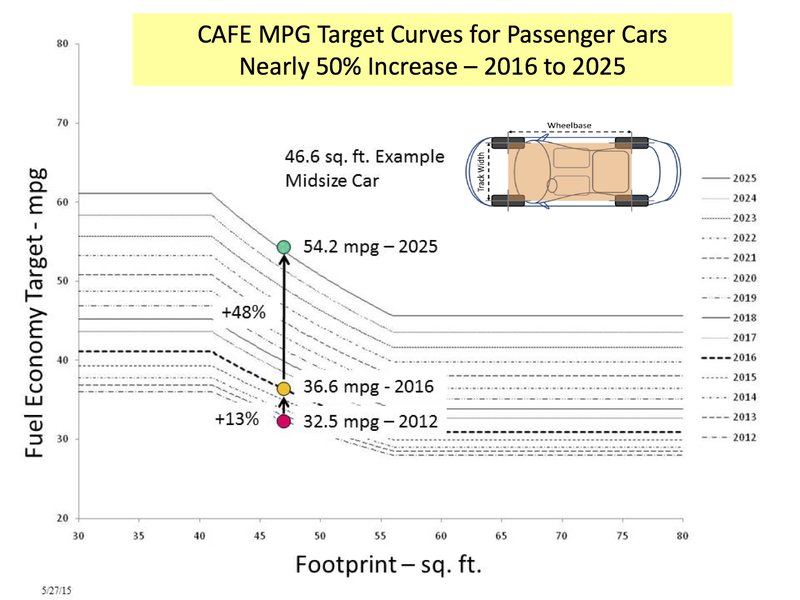 However, if all conventional technology must be used to meet the 2025 requirements on the base vehicle, as EPA and NAS predict, then accounting for sales of many high line models means that conventional technology will fall short of the requirements. The manufacturers will have to do more to meet the standards than what EPA and NAS predict based on sales of only base model vehicles. These additional technologies will include more hybrid-electric vehicles and all- electric or other renewable-fueled vehicles.

Luxury car manufacturers face the same issue on all their models, since even their base models have similar fuel economy to the high line versions of the domestic and Asian producers. Sports cars fare even worse under the footprint standard, and today’s Camaro and Mustang are more than 10 mpg under the standard.

Another significant factor for compliance with the new rules is that small, compact 2-wheel drive sport utility vehicles (SUVs) were recently reclassified by NHTSA and EPA as cars, a change from their previous designation as trucks. The base models of these SUVs are below the 2016 car fuel economy standards by 10 to 20 percent due to their high stance and weight, but are above the requirements for light trucks of the same platform area. Because these compact SUVs fall short of the car standards, reclassifying them as cars hurts manufacturers’ compliance. And because these compact SUVs exceed the light truck standard, removing them from the light truck category makes complying with the truck standard more difficult. Sales of these 2-wheel drive small SUVs have been strong in recent years, and this also means more reductions will be required of manufacturers than assumed by the agencies, where sales shares are assumed to remain constant over time.

Finally, we analyzed how many additional hybrid and electric vehicles will be needed until the year 2025 under the conditions of continued strong sales in the high line and small SUV markets. We find that the ability to continue selling high line, luxury, and sports cars, as well as increased volumes of smaller SUVs, will require hybrid sales to increase modestly to 2020 but sharply by 2025, when the market penetration of hybrid and electric vehicles will have to exceed 15 percent for many manufacturers. This may not sound like much, but, with the exception of Toyota, such vehicles make up less than 3 percent of sales for most manufacturers today.

Read all posts in this RFF blog series, Evidence for the New CAFE Standards:

How Much Do Consumers Really Value Fuel Economy?