International trade and travel can enable otherwise innocuous species to wreak havoc in new and novel environments. Evaluating the economic benefits of preventing the arrival and establishment of a damaging, invasive species through quarantine or preventative measures requires considering its total long-term damages from the time of its arrival onward. Previous literature has recognized that the spatial dynamics of bioinvasions—including spread rates, invasion range sizes, and geographic resource distribution—must be considered when estimating total invasion costs. However, most empirical studies of invasion impacts abstract away from invasion dynamics by only estimating short-term damages, limiting the usefulness of such estimates for evaluating quarantine and prevention policy.

In a new article in the journal Ecological Economics, Benefits of Invasion Prevention: Effects of Time Lags, Spread Rates, and Damage Persistence,* my colleague Andrew Liebhold, of the US Forest Service, and I theoretically examine a broader set of temporal factors affecting long-term damages, including invasion lags (i.e., the time between an invader’s arrival and the initiation of damages) and damage persistence. These attributes address the substantial invasion lag that most invading species exhibit and the considerable variation across species in how long damages last at an invaded location. We also empirically estimate long-term damages for three bioinvaders in the United States, from the time of their introduction to their potential future saturation of the eastern United States. The invaders in question are three forest insect species currently spreading through North America: the gypsy moth (Lymantria dispar), the hemlock woolly adelgid (Adelges tsugae), and the emerald ash borer (Agrilus planipennis). Each of these damaging forest pests differs in terms of its spread rate, damage persistence, and lag between introduction and spread, offering useful illustrations of the temporal patterns in question. 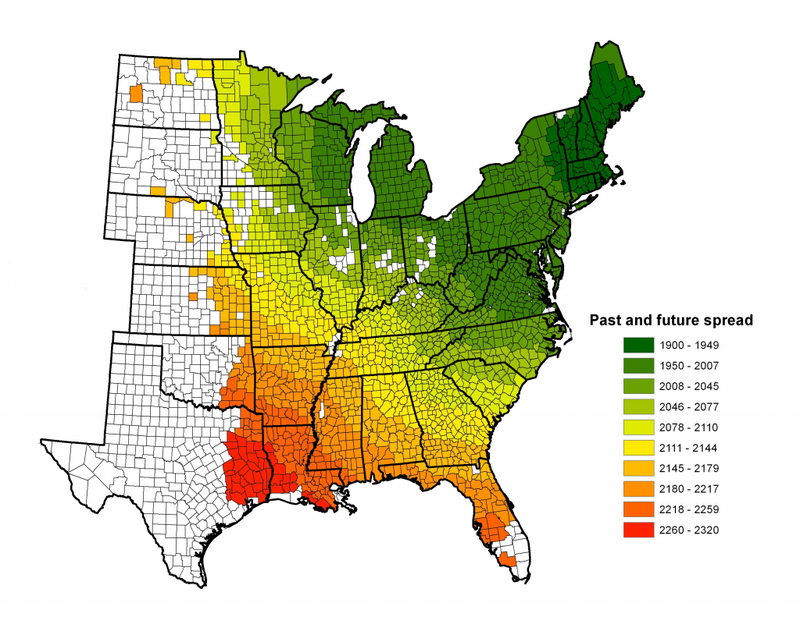 In our theoretical analysis we find that the impacts of invading species are most severe for those with the following characteristics (all else equal):

These characteristics cause damages to accrue quickly in the course of a bioinvasion, or over a larger area, increasing the benefits of prevention.

We predicted the long-term impacts of each focal invading species using the largest single type of damage caused by the species—residential property value loss for the hemlock woolly adelgid and gypsy moth, and community expenditures on ash tree removal for the emerald ash borer. Our spread estimates come from a combination of historical data on past spread and predictive models to simulate future invasion spread. The gypsy moth invasion is shown in the figure to slowly unfold over multiple centuries with a relatively short lag time (11 years). The hemlock woolly adelgid experiences a six-decade lag before saturating the eastern United States within 100 years. And the emerald ash borer invasion is expected to play out even faster, completely saturating forests by about 2050—only five decades after its introduction. (Figures illustrating spreads for the latter two can be seen in our journal article’s supplementary material.)

Our coarse estimates of total long-term damages varied considerably across the three species, with those for the hemlock woolly adelgid estimated at less than $4 million, in comparison to the emerald ash borer, whose damages are estimated around $15 billion over the duration of the invasion. Estimated long-term damages from the gypsy moth fall in between, at around $250 million. This disparity across estimates arises from differences in the local damage potential of each species as well as their temporal characteristics. For example, the hemlock woolly adelgid’s long invasion lag substantially reduces estimated damage. When considering its damages only from the time they were first noticed, rather than from the time when the species was introduced into the United States, estimates are six times larger ($21 million).

Well-designed cost-benefit analyses are needed to identify cost-effective mitigation measures that will ultimately lower the total damages that would otherwise accrue. Our new paper adds to the existing literature by exploring a more comprehensive set of factors that influence the timing of invasion damages and hence invaders’ total long-term impacts. Our empirical results, however, should be viewed as “back of the envelope” calculations that can inform future discussions, rather than as precise species damage estimates. We suggest, however, that the temporal characteristics of potential invaders —including spread potential, damage persistence, and lags— should be considered in invasion risk analyses and policy evaluation. Unfortunately, however, while invasion lags have substantial effects on total damages, invasion lag times can vary greatly across species and are difficult to predict, providing economic motivation for their study.

*A version of the article is also available as an RFF discussion paper. 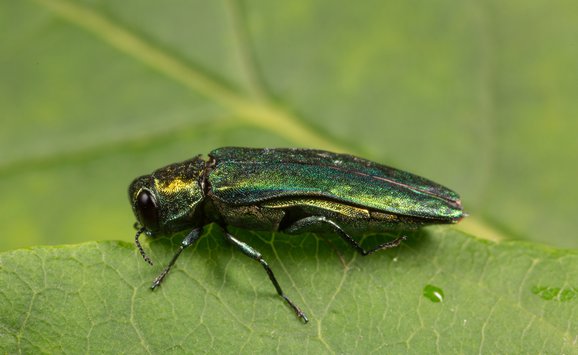