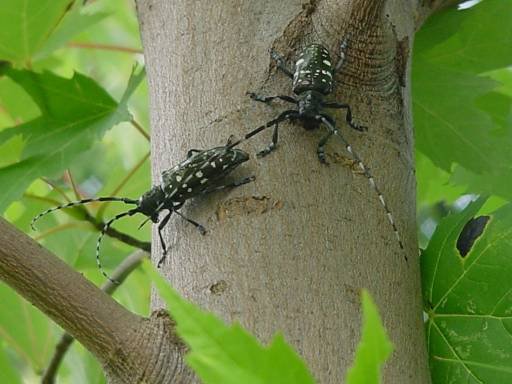 Two Asian longhorned beetle adults on a maple tree | Photo by Photo by U.S. Department of Agriculture | flickr (CC BY 2.0)

We are bidding farewell to August—Tree Check Month—during which the US Department of Agriculture’s Animal and Plant Health Inspection Service (APHIS) reminds the American public to check trees for signs of invasive species, particularly the Asian longhorned beetle. But these voluntary efforts by the public will remain important beyond August. This nonnative pest makes drill-like holes—about the size of a dime­—in a variety of trees. According to APHIS, these beetles “have the potential to destroy millions of acres of America's treasured hardwoods, including maple, birch, elm, willow, ash, and poplar trees.” Infected trees weaken and die, leading to falling branches that can cause extensive damages. For these reasons, substantial resources have been directed toward eradicating populations of Asian longhorned beetle that have established in the United States and Canada. How can public surveillance efforts such as those promoted during Tree Check Month help manage invasive species?

Greater surveillance, including voluntary measures by the public, increases the probability of detecting invasive species earlier—when efforts to manage and minimize their impact are less costly and more likely to be successful. But more intense surveillance often comes with high costs, and resources for surveillance often are allocated based on ad hoc approaches. My research applies an economic lens to design and evaluate early detection monitoring systems to reduce costs and improve outcomes. Most existing economic literature on pest surveillance has focused on active surveillance (e.g., planned visual or trapping surveys), but passive surveillance in the form of public reporting—including USDA’s Tree Check Month—also serves as a key source for new detections and can substantially reduce impacts on society.

In a paper published this year in the journal Biological Invasions, I discuss how economic analysis provides key frameworks for evaluating and designing invasion management policies and incentive mechanisms, including policies that affect public contributions to invasion spread and management. Bioeconomic modeling can inform policy design to help optimize resource allocation—to cover prevention, surveillance programs for early detection, and management efforts to control the spread of invasive populations to minimize long-term costs and damages. Given the varying dynamics that span the initial introduction of invasive species to native ecosystems and the time it takes for them to wreak havoc, managing these harmful pests requires a multifaceted approach.

Public awareness and participation are critical factors in reducing the impacts of invasive species on agriculture and our nation’s natural resources, as people often are vectors of new pest introductions (e.g., via a piece of fruit a traveler brings into the country or on pets or plants purchased on the internet from abroad). People also can inadvertently move pests to new locations (e.g., through the transport of firewood). But the public also is critical for controlling invaders that establish—and people can help such efforts by reporting new pests or diseased trees that they observe or by controlling invasive weeds or pests on their land or in their communities.

My earlier research with colleagues has shown that management of invasive species by the public (e.g., private landowners) can provide substantial societal benefits by reducing long-term invasion impacts, but it is often the case that coordination and additional incentives are needed to achieve the best outcomes for society. Improved understanding of behavioral science approaches that target behaviors that affect invasion processes also is needed. Such tools may be particularly important for reducing the spread of invasive species, enhancing early detection of new invasions by the public, and maximizing the benefits of the public’s control efforts. Integration of behavioral economic and bioeconomic modeling approaches is a key frontier for informing more effective management of biological invasions and protecting valuable resources.